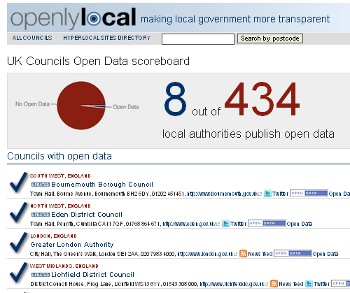 A newly published leaderboard shows just how far the UK’s councils have to go to open up their data to the public.

Over the past few months we’ve covered the growing Open Data movement. Opening up information about spending, crime, the environment and more will allow the public to better understand what their politicians are oing for them. It will also allow developers to create all sorts of interesting apps and services that make sense of the information.

London, the UK government and the Ordnance Survey are among those who have released their data to the public in recent months. New prime minister David Cameron has also thrown his weight behind the movement.

However, as the Open Data Leaderboard, published yesterday by Openly Local, shows, we still have a long, long road ahead. According to the leaderboard, only 8 out of 434 UK local authorities publish open data.

Openly Local is a project run by Chris Taggart that aims to bring data about local authorities together in one place. Most of this has to be manually researched and compiled thanks to the lack of truly open local government data.

Taggart says that he created the leaderboard for three reasons:

What’s stopping councils opening up? Taggart says that the main problems are simple lack of understanding. “The pain points and blockers to councils publishing open data…. turn out mainly to be lack of basic web skills in many councils, heavy use of outsourcing (which means either it’s impossible to publish open data, or expensive), inflexible CMSs, and general lack of understanding about open data.”

Taggart plans to develop the leaderboard further. The list will give more detail about the types of data available from each council. “Going forward, the idea is to extend the list, to give more details of what open data is published, how may datasets, and what sort of licensing is used. It’s hoped that the information will somehow be linked to the UK government’s Data.gov.uk service too.

[Thanks to Sam Sethi for the tip]