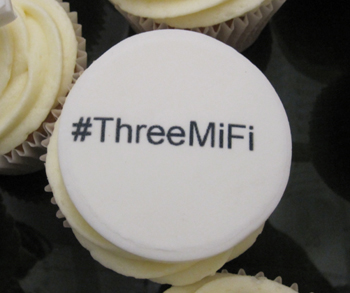 This converts a 3G data connection to a local WiFi network that can be used by one or more computers (like PC’s, iPads etc). It’s pretty much exactly the same form factor as the previous 3 MiFi unit, except there’s no longer garish flashing LEDs, but a single green LED on the side that shows if the unit’s on and a blue OLED display which displays what the unit is doing.

The colour scheme is radically different too, the body is matt black and the front is highly reflective so when the OLED display is off it can be used as as a mirror.

The battery seems to be the same as the old unit, however the battery life is meant to be significantly better and it only takes 30% of the time compared to the old unit to fully charge . A big new plus is that it can be charged while being used (and it charges via the USB port so if at a conference or out and about it can be charged from the laptop that is using it for connectivity).

Apple fanboys will be happy too as the device is now completely configured via a browser and Safari is supported.

Apart from that, it’s just another 3G to WiFi unit that’s very portable and now very easy to use (there’s also only one button to turn the system on and off). 3 seemed to have worked with Huawei and listened to feedback from customers. It’s still limited in that it won’t drop to 2G if there’s no 3G signal (which is a limitation of 3UK’s roaming agreements as they don’t support 2G for data at all), but it will reconnect if the 3G signal is temporarily lost. It supports upload speeds of up to 5.76Mbps HSUPA and downloads of 7.2Mbps HSDPA. There’s also an SDCard slot supporting cards of up to 32GB in size (currently accessed via the USB port, but maybe shared over WiFi in a future firmware update).

3UK will be selling the MiFi unit for £49 on a prepay contract next month (or as existing stocks last). There’s also going to be a firmware upgrade for the current MiFi units to bringing some of the new functionality to the existing units out there.

Read next: How to: Save yourself from procrastinating..