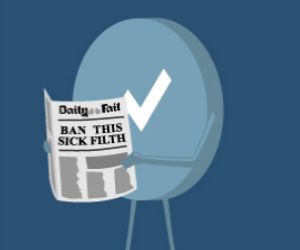 The Daily Mail has found itself at the wrong end of a royalty battle after it published photos posted to social networking site Twitter without obtaining permission, only to find it would be billed ten times the normal rate for unauthorised use.

According to The Register, documentary film-maker Emily James had taken a series of images to taken at St Vincent Polling Station in Dalston on the day of the general election, capturing the “voting frenzy” at the polls. The photos were then posted to the Just Do It Twitter feed (a project linked with James) via the image sharing service Twitpic.

Many news outlets, including the Mail found the photos and proceeded to publish three of the images in articles covering the election. Whilst all other outlets contacted James to seek permission to use the photos, the Mail published the images, without byline or any contact with the copyright holder.

James was understandably irked and promptly billed the Mail for a cool £1170. The Register points out that the prices are based on the NUJ recommended rate of £130 per image, multiplied by three for the unauthorised use and multiplied by three again for the number of images.

It wasn’t long before Elliott Wagland, Pictures Editor for the Mail replied:

“Unfortunately we cannot pay the amount you have requested, these images were taken from TwitPic and therefore placed in the public domain, also after consultation with Twitter they have always asked us to byline images by the username of the account holder.

“We are more that happy to pay for the images but we’ll only be paying £40 per image.”

Yes, you read that right. The Mail assumed images posted to Twitter via services like Twitpic could be reproduced because they were released in the “public domain”. Its fairly obvious they didn’t consult with Twitter either.

James was quick to point out the flaws in Wagland’s reponse, firing back another email:

I’m afraid that you are wrong about the terms of publishing on Twitpic. If you read the terms of service you will see that copyright is clearly retained by the poster: http://twitpic.com/terms.do

Third parties who wish to reproduce posted images must contact the copyright holder and seek permission.

You should have contacted me if you wanted to use the photos, as every other news outlet did. Had you done so, you might have been in a position to get the photos for £40 each.

There you have it, the Mail could have saved itself a whole lot of unnecessary exposure by reading Twitpic’s terms and conditions properly and operating by the same code of ethics as its competitors. It did not.

At the time of writing the Mail have not responded to the last email but we have reached out to Emily James for comment. Check back to see how it all pans out.

Update – We have received a reply from Emily James, it looks like she has made some headway. It reads as follows:

We got a message from Alex Bannister, managing editor at the Daily Mail this afternoon, via Olivier Laurent at the British Journal of Photography. Olivier put in a call to them yesterday, and Alex responded asking me to get in touch and saying that they will pay more than the £40 per photo that they normally pay, but not the full amount of my invoice.

I have penned an email to Alex, but I am not going to send it until I’ve had a chance to consult with a couple of advisors, and potentially a lawyer.

Essentially I indent to demand at least the payment that I invoiced for, but more importantly an apology and a statement that they will discontinue what is clearly a policy of stealing photographs on the assumption that they wont get caught, as well as largely ignoring the complaints of the individuals they’ve stolen from.

Later in the email:

As I’ve said elsewhere, this isn’t about getting lots of money out of them, though we’re happy to take it, and it’s not that we are particularly into enforcing copyright, for us it’s really a question of manners, and of not using our work to sell ads on their corporate site.

As someone who publishes a lot of work under creative commons licenses, I’m generally pleased to see my material reproduced, but I did not take the photos of people being denied their right to vote on election night inorder for the Mail Online to use them to sell ad space without asking me, informing me, or paying me for the privilege.

As a commenter has pointed out, it doesn’t seem to be an isolated incident. We will be keeping an eye on the Just Do It Twitter feed and will let update the article with the outcome as soon as we receive any further details.