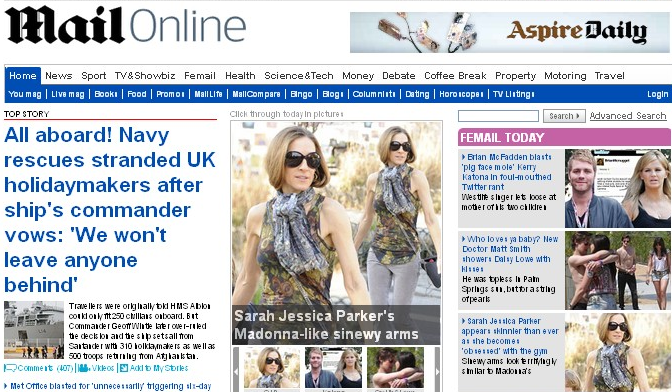 While Rupert Murdoch is preparing to throw up a paywall around his UK newspaper sites, his biggest rival says that they won’t work and ads are enough.

DMGT, publisher of the UK’s most-visited online newspaper the Daily Mail, told investors yesterday what media and tech commentators have been saying all along: “Readers will not pay to consume general news on the web”.

The Guardian notes that slides from the presentation have been posted by the company (PDF link) and they reveal a refreshingly open-minded and enlightened approach to the realities of online news.

No matter what you think of the Daily Mail’s reactionary, celebrity obsessed and sometimes trashy approach, it’s a breath of fresh air to hear a news organisation admitting that “All news has traditionally been free – EXCEPT print…. People pay for the convenience of print in recognition of the special cost of production and delivery of a tangible product and because they purchase it WHOLE… Which is why they will also pay for news on mobile devices.”

Secret of the Mail’s success

As the UK’s most popular online newspaper, Mail Online says it can make a profit from its website using advertising alone. Online ad revenue at the company is up 131% year-on-year thanks to a young, relatively wealthy online readership.

By focusing on celebrities and tracking minute-by-minute exactly what’s popular on the site, the site hones its content so that it is exactly what readers want. While the Mail will stay largely free online, it will experiment with charging for niche content.

The model of keeping core news free and charging for ‘extras’ is borne out by news from the UK city of Manchester where a local lifestyle news website Manchester Confidential this week tore down its failed paywall experiment, saying it was a failure but that it could make a healthy profit by selling services related to its content. This includes discount bookings to spa days and guaranteed seats at in-demand restaurants.

Both the Mail and Manchester Confidential’s examples show that while there’s no “magic formula” for staying free in the online news business, you can find something that works if you look hard enough. With Rupert Murdoch’s first UK paywalls launching in June, we won’t have long to wait to find out which option readers prefer.

Read next: Hey Zuckerberg, Give Me Back My Facebook Lite