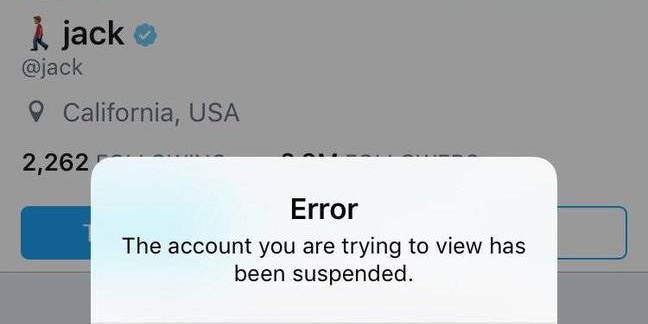 As if Twitter hadn’t already dealt us enough rude shocks all year, the company had another big one up its sleeve: suspending its CEO’s account.

The Register reports that around 6PM PT, CEO Jack Dorsey’s profile (@jack) displayed an ‘account suspended’ message. The company managed to restore his account 15 minutes later. The gaff amused many a Twitter user:

HAHAHA @Jack Dorsey got suspended from his own platform 😂😂😂

For a brief period, @jack’s profile hadn’t yet had its full follower count of 3.9 million restored. Naturally, jokes ensued:

Guys, I now have more followers than @jack pic.twitter.com/tgfktdvxCt

To their credit, Dorsey and Co. laid the matter to rest with a clever quip:

Fans of Twitter will recognize Dorsey’s reference to the first tweet ever, which he posted in 2006, back when the service was called twtrr.

Interestingly, @jack now has only 3.47 million followers. It’s unclear as to how the profile may have shed close to half a million followers over an internal error, but let’s hope that doesn’t happen to anyone else.