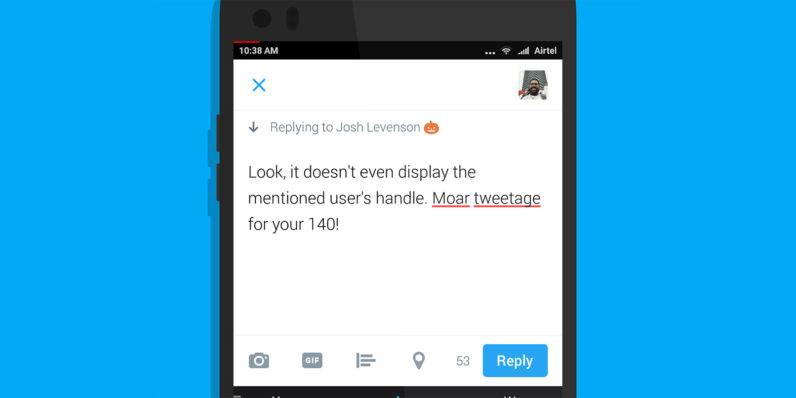 Last month, Twitter made a major change to its platform: It stopped counting media attachments like photos, videos, GIFs, polls, and quoted tweets toward the 140-character limit per tweet.

TechCrunch found that the company is now testing another way to let users say more in tweets. In a limited trial for some users on mobile, Twitter is no longer counting usernames against your character limit in replies.

That means that when you’re responding to a single user or a bunch of them, you’ll be able to reply with all 140 characters. That marks the sinking of the Twitter canoe, which refers to a string of user handles that you see in a tweet when multiple users are in a group conversation.

It’s worth noting that this is only being tested with a small group of users at the moment, and it’s only on Twitter’s mobile apps; the Web app and TweetDeck don’t support it yet. Plus, it’s only for replies and not fresh tweets.

It might need a little refinement, though. If you’re used to seeing your recipient’s handle pre-filled when composing a reply, the empty text field might be a bit confusing. A tooltip or animation might help clarify things for users who are encountering this feature for the first time.

Read next: Pocket makes it easier for avid readers to binge on the Web's best articles