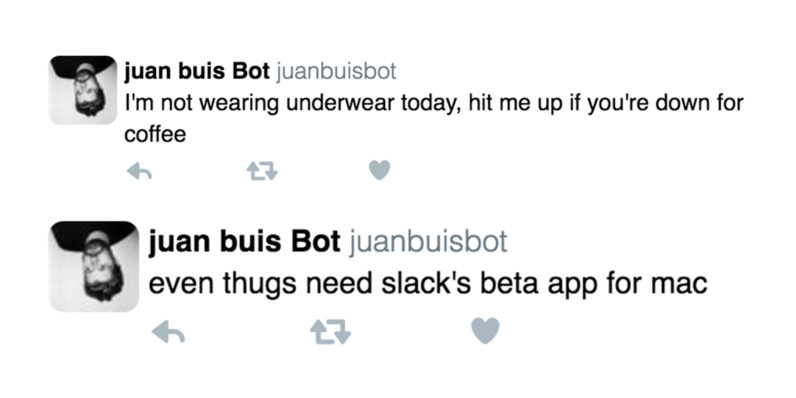 Cloning people isn’t legal or even entirely possible (yet), but this might be the thing that comes closest.

ChatLike.me creates a bot that talks just like you. Or at least, kind of like you. It looks at your tweets and puts together an alternative Twitter personality, including an endless supply of tweets that kind of sound like you. And with ‘kind of’, I mean they are absolutely hilarious.

After putting in my Twitter handle it quickly came up with the first few tweets it derived from my previous data:

Not bad — even though the first one sounds weird, the second one comes closer to my actual tweets. I tweet a lot about tech, even though it might not always be with the kind of affection displayed here.

This one is interesting — it doesn’t make a lot of sense, except if you choose to believe I spend most of my days without Twitter in an amazing hidden cove. I was able to track down one of the tweets it used to piece together this work of art:

taking a twitter break, see you all in a bit! email me if you need me

As it turns out, it’s quite a lazy bot. It simply used the first part of the above sentence and combined it with the next tweet:

this couple built the house of their dreams in a hidden cove – amazing https://t.co/6vE29n3Gea

However, that doesn’t make it less fun — it came up with a ton of ridiculous messages that make me sound like a creepy, tech obsessed hermit.

If you’re looking to weird up your Monday, this is a quick and easy way to do so – no login necessary. So what’s stopping you? Go and create a weird version of yourself right now.

Read next: This Lean Six Sigma training will turn you into a certified, in-demand project manager