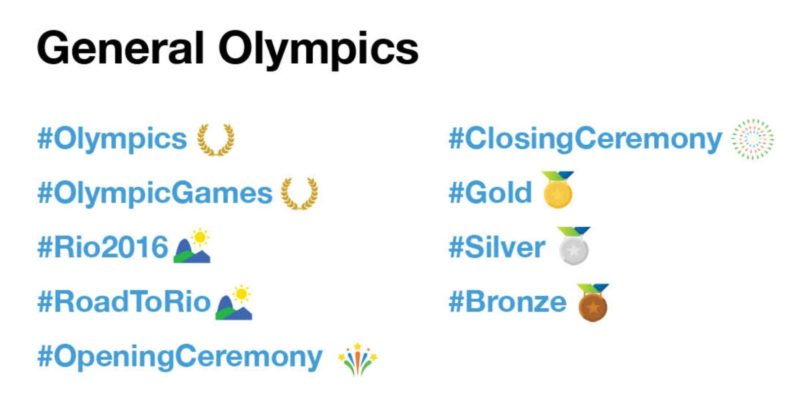 The Olympics are set to start on Friday, and following WhatsApp and Google, Twitter is preparing its onslaught of related media.

Because all modern promotions now need their own emoji, Twitter is making available not one, not two, but two-hundred-and-sixty-two emoji for the Olympics.

Most of these (208) are team flags that can be activated using hashtags with three-letter country codes (e.g. #USA), but 54 of them are for either sports or Olympics-related symbols. The emoji will be available “in the coming days,” and you can view the full list here.

The other big bit of news is the introduction of country-specific Moments. There will be a new Rio 2016 section in the Moments tab, from which you can choose to follow news on any particular teams you’re interested in. These are the longest Moments Twitter has ever done, lasting for weeks at a time.

This also might actually be the best use of Moments we’ve seen yet, as it makes perfect sense for the end user to follow them. Twitter will be overloaded with news from all participating countries over the course of the Olympics, and this makes it easy to simply filter out the countries you care about to catch up on news, medal counts, stats and more.

Finally, there will be a new featured channel in Periscope with Olympics-related content, while the competition will be highlighted in Vine’s Explore section. In a nice touch, if you double tap a Vine from @Olympics or individual team accounts, you’ll see an Olympic flame instead of the usual heart.

Read next: 'littleBits' is training small intelligence operatives with its new 'Rule Your Room' kit