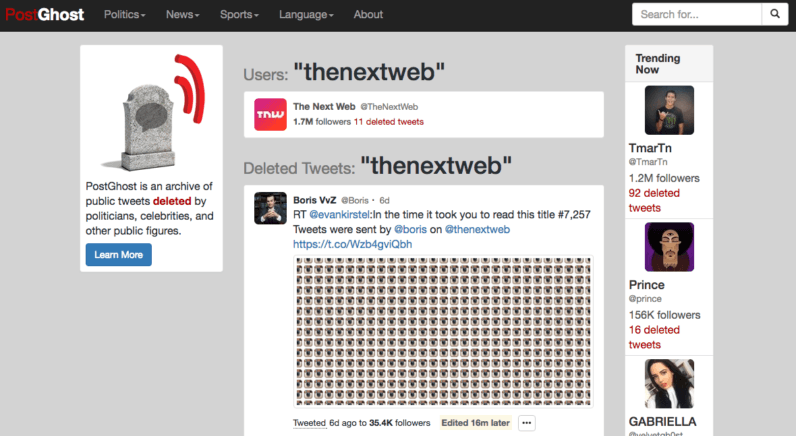 Update: As expected, PostGhost received a notification from Twitter that the app was in violation of its Developer Agreement and Policy. As such, it was shut down on July 6.

Verified Twitter account holders often get stick from other users due to that famous blue tick. The social media ego checkmark, if you will.

Well, this tool will delight the frustrated majority who lack such social validation on Twitter. PostGhost tracks all the deleted tweets of any verified Twitter account with over 10,000 followers.

It acts as a public archive of deleted tweets from those people Twitter has deemed worthy of its geek status symbol. Whether the verified user deleted their tweet due to a minor typo they simply couldn’t live with, or that dumb late night drunken tweet, or even one of those tweet storm rants they regretted minutes, hours or days later – they’re all here for the world to dissect, ridicule or speculate over why it was deleted.

By way of an example, here’s what PostGhost shows for my deleted tweets:

There are other tools like PostGhost, Politwoops being the most well-known for chronicling politicians’ deleted tweets. The difference here is the wider selection of accounts it is tracking.

Given what this tool does, and the type of user it is (possibly) shaming, don’t expect PostGhost to be around for long. It wouldn’t surprise me to see it taken down at the demand of either Twitter or other angered parties.

For now, go enjoy and read the many #tweetfails of the ‘Twitter Elite’.

Read next: This weird Japanese instrument is equal parts horrifying and satisfying