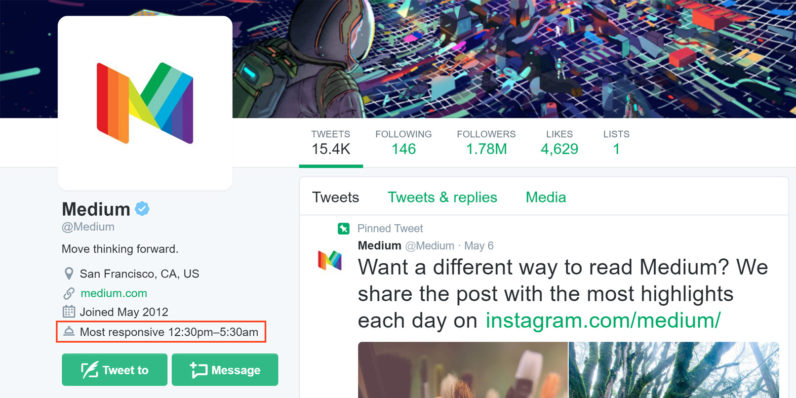 Twitter appears to be testing a new feature that should help users get faster customer support from brands and businesses they follow on the platform.

On select profiles, it’s now displaying when those accounts are most responsive. You can see what that looks like on Medium’s profile page.

The feature is similar to one that Facebook rolled out for Pages. Last August, the social network began displaying a badge that read ‘very responsive to messages’ on Pages that had a response rate of 90 percent and a response time of 15 minutes.

As with other features that we’ve seen on select profiles, this might only be a test Twitter is running; it isn’t clear if it will become available to all users and if they’ll have any control over it. But it should make it easier for users to figure out when they can expect to hear back from businesses once they’ve posted a question or complaint.

It’s also trialing a new ‘Featured Tweets’ tab that seems to display tweets curated by the account owner. You can see it in action on IFTTT’s profile.

Both features are viewable on the Web as well as Twitter’s mobile apps.

If they’re made available more widely, they’ll likely build on features Twitter introduced in February for brands that handled customer service on the platform, including a call to action button so users could quickly start a direct message conversation and survey questions with standardized score responses.

Read next: Nobody will click your links ever again with this shady URL shortener