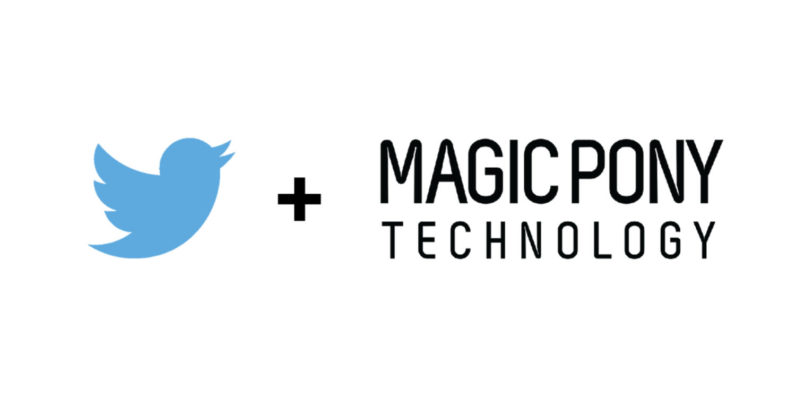 Twitter has just acquired a fantastically named startup called Magic Pony, which specializes in using artificial intelligence for visual processing. The point of it all? Making sharper live video.

Magic Pony’s research centers around using neural networks compare an image to a library of similar ones. Basically, it knows what the important bits of an image are to our human eyes and fills in the gaps. The technology has previously been used to generate complex high resolution textures from smaller ones – kind of like a more advanced version of Photoshop’s Content-Aware Fill:

Perhaps more impressively (and more relevant to Twitter) it can make a pixelated character look practically hand-drawn:
So you can probably see where this is going for Twitter.

That said, although Magic Pony’s technology could be used for photos, static images already deal with compression fairly well. Instead, Twitter specifically mentions it plans on using Magic Pony’s processing for “live and video,” which tend to be very heavily compressed on the social network.

With Magic Pony’s AI, compression algorithms can be catered around preserving the important details of video. Alternatively, the company has demonstrated using its technology to intelligently sharpen video on the client side – even with a mobile GPU- to significant effect:

Magic Pony’s team will be joining Twitter’s Cortex team of engineers. Twitter isn’t disclosing how much it actually paid for the company, but TechCrunch reports that it shelled out about $150 million.

Read next: Why Bose's new wireless headphones should always be in your hand luggage