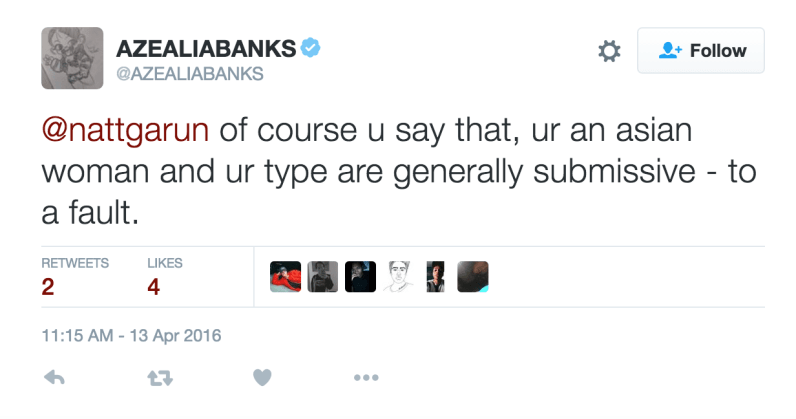 Today in two people you didn’t think would be in the same sentence, rapper Azealia Banks claims that Twitter/Square CEO Jack Dorsey promised to tweet about her mixtape if she tweeted about Square’s Cashtag. Evident in his Twitter feed, he did not do so, and she threatened to “hex” him.

As one does on the Twitter, I shared the tweet due to its absurdity – but I didn’t expect Banks herself to come after me with a racially insensitive clap back (since deleted).

The escalation! What follows is a series of tweets with Banks particularly interested in my Thai background, asking about some sunscreen she got in Bangkok. I’m happy to help with Thailand-related questions where I can, but girl, you can’t ask for a favor after insulting my character.

I’ll be honest, previous to this exchange, I didn’t follow much of Azealia Banks’ works. I recognize that she’s a pop culture figure, but most times I see her name it’s usually about a controversial comment she’s made – I just didn’t imagine one would ever be directed at me, an obvious nobody.

After some back and forth, however, she took back her comment and claims that having been taken advantage of by men in the past, her tweet was reactionary and she did not mean to offend. It felt more honest than when she retracted the comment on wishing former Alaska governor Sarah Palin sexual assault.

@nattgarun but really. i apologise for calling u submissive for siding with cracker jack. it was mean.

Whatever. All’s good in Azealia land. She even told her stans to back off when they hopped on the racist insults train, but naturally, things go off the deep end immediately.

@AZEALIABANKS @whitenicious @nattgarun I would like to have sex with you

Still, what we really want to know is if Jack Dorsey promised Banks to tweet about her mixtape. In a chat, Banks tells me their exchange was over text, but that conversation has since been deleted and it’s honestly “not that serious.”

I also asked her who Twitter’s new CEO really should’ve been, but Banks did not respond.

Update: Azealia has made her prediction. Remember, blame patriarchy for our racism.