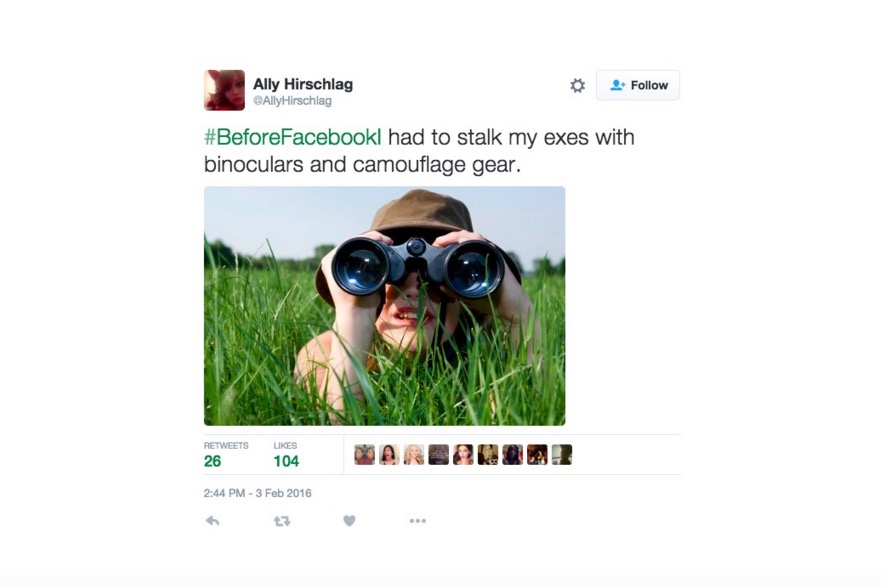 Facebook is celebrating its twelfth birthday by creating a virtual holiday called Friends Day and giving its users friendship-themed videos as a gift. Meanwhile, the rest of the world is reminiscing about simpler times ironically over on Twitter.

#BeforeFacebookI started trending last night as people on Twitter decided to look back at what life was like before the social network existed.

Here are some of the best ones we’ve spotted so far:

#BeforeFacebookI adjusted my privacy settings by closing my blinds. @midnight

Remember when protecting yourself was as easy as locking the front door or wearing a helmet?

*Sets reminder to check in with Tom.*

#BeforeFacebookI had to stalk my exes with binoculars and camouflage gear. pic.twitter.com/kpGaZUrEiN

I would say 90 percent of the tweets celebrated how easy Facebook has made stalking. Thank you for that, Mark Zuckerbeg.

#BeforeFacebookI could have gotten arrested for "poking" a stranger.

It’s true. And we certainly didn’t ask strangers to come and crush candy with us before Facebook either.

Didn’t we all, Edward.

#BeforeFacebookI lost sleep over how acquaintances I sat next to in high school social studies spent the weekend with their kids. 😲

Or how often they go to the gym, what they ate for dinner, got for their birthday, when they got engaged, had an emotional moment, found inspiration in a misquoted meme…

Read next: Apple and Cisco acknowledge that 2.4GHz Wi-Fi is too unreliable and crowded