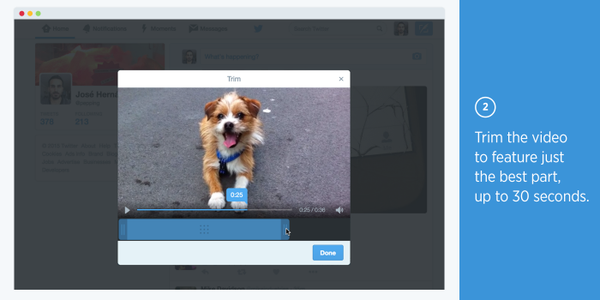 Though Twitter.com is generally regarded as the most powerful version of Twitter, some features come to mobile first, including video. That’s changing today – you can now upload video via the Web interface.

Your phone shouldn't have all the fun. Videos can now be uploaded to Twitter via web! 🎬 https://t.co/4Q4rpzUmPh pic.twitter.com/AdqK2U9SRQ

Now when you begin a tweet, you can click the ‘Add media’ button to select a video in addition to just photos.

And at a conference in New York today, the company said it would soon implement a GIF finder and generator too, in addition to bringing better Periscope integration to your timeline.

Note that videos are limited to 512MB, and if over 30 seconds, Twitter will open up a trimming UI.

It’s a neat update as Twitter pushes video content more heavily and tries to liven up its timeline, especially as it looks to incite engagement with its new Moments platform.

But it’s also a play into what could be a huge source of new revenue: video ads. The company today announced it would be making it easy for marketers to play 6-second ads before professional video content on its platform.

The technology will allow advertisers to target the most relevant demographics. According to Wall Street Journal, Buzzfeed, Vox Media, Aol, Fox, MTV, Time, Mashable, Funny or Die and Univision have agreed to have ads placed before their videos, but it plans to open up to several more partners soon.

Publishers are offered 70 percent of ad revenue, as opposed to YouTube and Facebook, where they’d only get 55 percent. It’s is an easy way for the company to encourage more content creators to publish and promote videos via Twitter, especially given some celebrities and brands already have millions of followers.

In other words, expect to see a lot more video ads on your Twitter timeline soon.

Read next: Facebook Messenger is now available for the Apple Watch