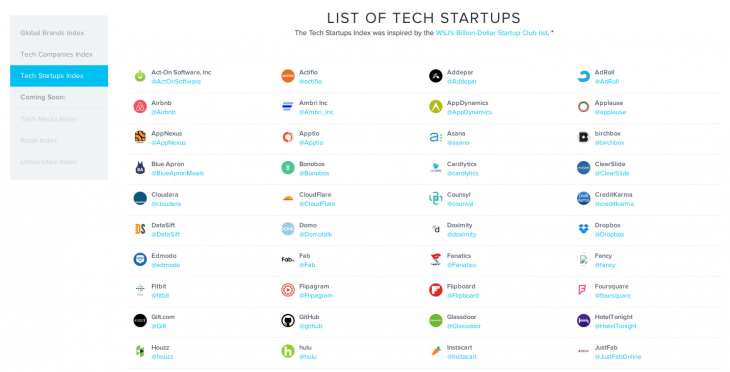 The latest index tracks 86 companies. It’s based on a list of the world’s most valuable startups published by Fred Wilson, Willaim Mougayar and the Wall Street Journal. SocialRank filtered the index based on three criteria to include privately-owned companies founded after 2006 in the US. That means it includes big hitters like Uber, Snapchat, Airbnb, GitHub, Dropbox and Slack.

As you might expect, followers for companies in Tech Startup Index are more geographically condensed than bigger companies and brands represented in the other indexes. 31 percent of the index’s followers are based in California, 26 percent in the UK and 23 percent in New York. In contrast, 31 percent of followers for the Tech Companies Index, which includes organisations like Google and Amazon, are based in India.

While accounts covered by the Tech Companies Index obviously have more followers, the quality of followers in terms of activity and distribution is stronger among the Tech Startup Index. However, engagement from followers and non-followers is much higher among larger tech companies than startups.

The data in the Tech Startup Index is updated every hour and it’s free to access from today.

Read next: Facebook's Messenger chief on selfies, payments and a desktop app