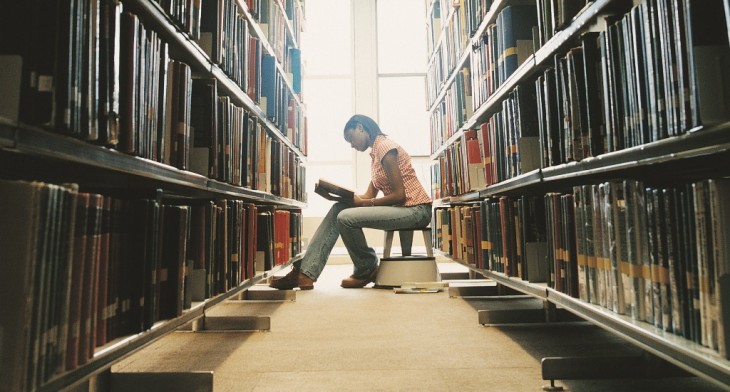 Many Twitter noobs open an account, and are immediately at a loss as to what they’re actually meant to do. I’m still often asked, “Who is worth following?”. The answer is, of course, very subjective – it depends what you like.

The standard accounts I’d suggest would be sports teams, news sites (e.g. BBC), celebrities (if that’s your thing) and comedians. That’s a good starting point for anyone looking to make inroads on Twitter. Plus, there’s a whole host of brilliant and barmy Twitter accounts that may or may not take your fancy.

But given the transient nature of Twitter – tweets come and go in seconds – I love those little nuggets that jump out at you among all the rabble. Usually they’re enlightening in some way, imparting some kind of factoid that forces your finger to retweet without a second’s thought.

With that in mind, here’s ten educational, informative or otherwise enlightening Twitter accounts you should consider following.

They say a picture’s worth a thousand words, right? Right. And that’s why photo-based Twitter accounts are particularly prudent, given the 140-character restriction.

There are quite a few historical imagery Twitter accounts, and one of the more active ones is ClassicPics, which posts gems such as Bruce Lee performing one-thumbed push-ups, and Abraham Lincoln meeting Major General George B. McClellan during the American Civil War.

Abraham Lincoln and George B. McClellan in the general’s tent at Antietam, Maryland, 1862. pic.twitter.com/VaEcVvElLw

Equally, there’s HistoryInPics, and Historical Pictures, where you can find tidbits such as bizarre Japanese train concepts, and that time Kiss met Tupac. Yup.

Mental Floss is an oldie but a goodie. This Twitter account serves as an online ‘face’ for the Mental Floss publication, and typically links out to articles from the magazine. So it’s not all self-contained with the tweet per se, but you will find yourself clicking on the link more often than not.

In honor of National Punctuation Day, here are 13 little-known punctuation marks you might enjoy — http://t.co/3UOSkS0UMh

Then there’s the likes of 8 surprising facts about Malaria, or the 10 Biggest Viral Hits of 1830-1860. Sure, it’s a little BuzzFeed-esque, but it has a little twist of ‘smart’ thrown into the mix.

NASA needs little introduction, and the US government’s space agency puts its Twitter account to full use.

Not only does it post pictures of new members arriving on the International Space Station (ISS), and link to new star photos from the Hubble Space Telescope, but it also guides you towards tweeting astronauts worth following.

If you have even a passing interest in space exploration, NASA should be on your follow list.

There are a tonne of fact-based Twitter accounts out there, and UberFacts is one of the more popular. Unlike Mental Floss, which sends you off to articles on its website, UberFacts typically posts little gems directly in the tweet itself – ideal for those with serious attention deficits.

Louisiana is the prison capital of the world – Where 1 out of every 86 adults is in jail.

Did you know that prior to the 1940s, pink was apparently more of a masculine color? No? Well, now you do.

The Next Web was first on the scene way back in 2011 when RealTimeWWII launched to the world. It’s the handiwork of an ex-History student, who has been using Twitter to ‘live tweet’ World War 2 as though it’s breaking news.

Kicking off more than two years ago, 24-year old Alwyn Collinson plans to bring key events from the war to the Twitter generation for its full 6-year duration. A mammoth undertaking, you’ll surely agree, but he’s done a stellar job thus far.

Atlas Obscura is one of those little gems that doesn’t seem to have attained widespread recognition, but it is a fantastic account to follow for anyone with even a fleeting interest in travel. It recently partnered with Slate too, so its reputation can only grow.

Atlas Obscura is all about the world’s hidden wonders, looking at Earth’s most disorienting locations, and surfacing photographs of abandoned water slides. Interested in ghosts? It has you covered.

This photographer traveled to haunted spaces around the US to capture the details of their interiors – http://t.co/jbc2rEWrx5

Sure, it may just be a stream of tweets linking out to to its online magazine, but that’s fine with me.

Okay, Word of the Day isn’t going to transform you into Proust overnight, but it will teach you not only that fugacious is a word, but what it means.

It has been online since 2009, but it doesn’t actually tweet a new word every day, which is a shame.

➤ Word of the Day

Long Reads presents a hand-picked selection of some of the best storytelling on the Web.

You can post your suggestion by appending a link with the hashtag ‘#longreads’, and the good folks behind the Twitter account will decide which ones make the grade.

Three or four #longread articles on average are tweeted each day.

When it comes to technology-focused Twitter accounts worth following, it’s difficult to know where to really start, but the Massachusetts Institute of Technology (MIT) is a pretty good place in our humble opinion.

MIT operates at the bleeding edge of technology, and its MIT Tech Review Twitter profile serves up a handy snapshot of new technologies, highlighting their wider impact and how they may change our lives.

Pick the headlines that interest you most, and click on through to read more.

TED has been focusing on ideas worth spreading for almost thirty years now, and with the proliferation of connected devices, it’s easier than ever to watch innovation personified.

The Ted Talks Twitter account highlights one inspiration TED talk each day, normally with an irristable headline that just beckons you to click through and watch.

Want to know why bees are dying, or how Formula 1 racing could help babies? Follow Ted Talks.

Of course, there are a myriad of educational, fascinating and otherwise enlightening Twitter accounts out there. Which ones would you recommend to a friend joining Twitter for the first time?

Read next: WriteThat.name takes its contact wizardry to the Web with Chrome extension