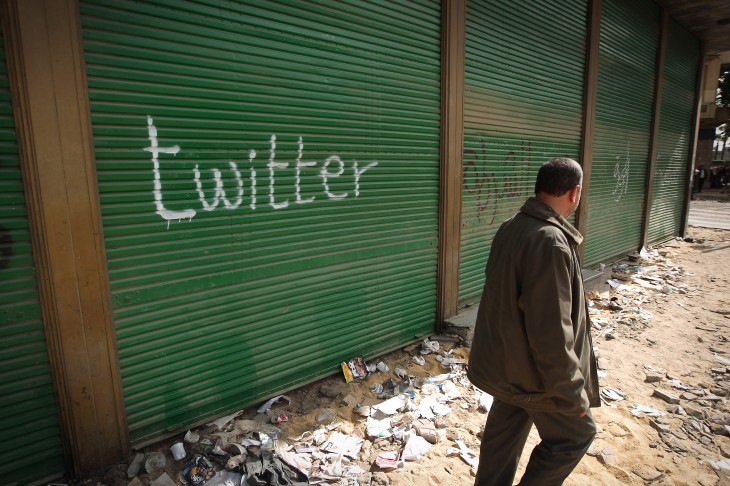 There’s no discounting the impact that Twitter is having on the way we communicate with one another. On Wednesday, cable news network CNBC will air a one-hour special called #TwitterRevolution that showcases how this microblogging platform has grown up in the past seven years to effectively become a global community. But it’s not all praise for the company, as some question whether the service is opening up a pandora’s box of trouble that could lead to the proverbial ‘end of the civilized world.’

CNBC reporter Carl Quintanilla is the man in front of the camera for this documentary that looks at the growing popularity of Twitter, but also looks at the criticism it receives, including the proliferation of anonymity, bullying, and false information.

The show starts off looking at the famous “Miracle on the Hudson” photo and Tweet — one of the many instances that really got the mainstream world abuzz over this “140 character” technology. The photo taken by Janis Krum on that fateful day on the New York ferry helped propel not only himself, but the service, to instant fame.

http://twitpic.com/135xa – There’s a plane in the Hudson. I’m on the ferry going to pick up the people. Crazy.

From there, Quintanilla takes a look at how recent events have been affected by Twitter’s place on the world stage, including the Boston Marathon where not only ordinary people were using it, but also law enforcement, suspects, and the media. But while the show seemed to focus on the platform’s place in tragic events, it also has its place in global affairs such as the Olympics, sports, television, presidential elections, and more. It has helped bring us together to help be this global town square that Twitter CEO Dick Costolo envisioned.

In a way, #TwitterRevolution is aptly named since the social media service has certainly changed the way we interact with one another, at least virtually speaking. But is it a good thing? Rather than normal conversations taking place in cyberspace (yes, I did just say that), it now involves advertisers, which gained entrance into the 200 million user club four years ago. Would that sully the purity of discussions taking place? It doesn’t seem to have had a negative effect so far.

So will Twitter go public anytime soon? The company has made some moves, specifically posting job openings for a financial reporting manager with experience in public documents. Costolo wouldn’t answer the question outright when prodded by Quntanilla, this time choosing to respond with:

When I get up in the morning and think about what we have to accomplish here in building this global town square, and reaching the number of people we’re trying to reach and growing as fast as we’re growing in all these different places around the world and trying to build and scale a global organization — those are the things that occupy all my time.

Take a breath, Costolo. We get it.

Twitter is certainly diversifying its portfolio. It has acquired analytics companies, launched filters for photos, and created its own ecosystem of apps, including TweetDeck and other third-party offerings. But what about Vine? The six-second video product is one of the company’s recent forays into the media world, but it quickly found itself competing against Instagram, which launched its own 15-second video service in June.

Amid some reports saying that Instagram video was being used more than Vine, Costolo refuted that claim, telling Quintanilla that Vine is “growing as well as we had hoped and in fact has inspired the sort of creativity we all hoped and knew it would.”

Decline of the civilized world?

When asked about his thoughts about what critics see Twitter has the harbinger of doom for the civilized world, Costolo shrugs it off and says he has a “philosophical difference” with those people. He reiterates that the company is recreating the town hall of yesteryear in today’s society using available technology. It has become seen as such by politicians including US President Barack Obama, former President Bill Clinton, congressional leaders, and other heads of state.

Costolo says that the town square was where people flocked to feel more connected with politicians, musicians, and each other: “it was totally unfiltered and raw.”

But it’s that kind of attitude that has the company’s critics in an uproar because they feel that there’s no censor. Just look at the US presidential elections in 2012 — after President Obama won a second term, one need only do a search to find racist tweets written by young adults and teenagers, many who probably haven’t thought twice about what they’re sharing.

Also, Twitter is facing a growing movement by users who feel the company isn’t doing enough to protect them from abuse and bullying. In the UK, a campaigner was deluged with rape threats via the social network, prompting a company executive to respond saying that Twitter “take(s) online abuse seriously” and will “suspend accounts that, once reported to us, are found to be in breach of our rules.”

But is it really a bad service? After all, Twitter is one of the few technology companies that reportedly rebuffed the National Security Agency’s efforts to get it to cooperate with its Prism surveillance program.

It’s probably assumed by most people that Twitter is on the road to an IPO where it will become a public company. But then again, if you subscribe to Costolo’s goal of Twitter being the town square, isn’t it already?