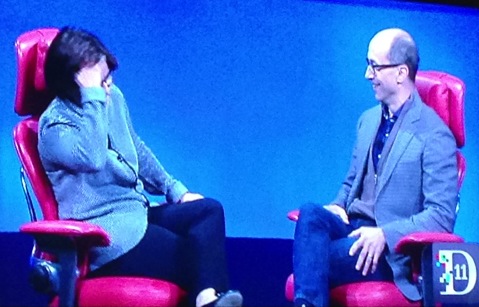 Today at the D11 conference, Twitter CEO Dick Costolo spoke on a variety of topics including platform security, its relationship with broadcasters and how fast it’s innovating.

Twitter recently announced a partnership with video providers to offer near real-time highlight clips on the platform, as well as hosting all kinds of other content that, while not ads, is essentially cross-promotional programming.

“We think there’s a bunch of ways that we can be complementary to broadcasters,” Costolo said, acknowledging that Twitter would be pursuing a range of partnerships, rather than a replacement of the role of traditional broadcasting.

All Things D’s Kara Swisher asked Costolo about what Twitter has been doing about platform innovation and how he was going about creating new things at the company.

“I’m looking to the team. Within the framework of direction, we have almost 1,000 engineers at Twitter. I’m looking at those guys to create.” When grilled about what specifically Twitter had introduced lately, Costolo said that “I think the new pure Android stuff is working fabulously well for us. The Discover tab on Android is being used more as we drive increasingly relevant stories.”

Speaking about speed and flexibility of changes, Costolo says that mobile developer teams at Twitter can roll out any experimental features they’re testing to 1 percent of users whenever they want. No legal, comms or CEO approval needed.

When it comes to working with developers outside of Twitter, Costolo reinforced that it doesn’t want people duplicating what it sees to be the core of ‘Twitter’.

Developer alienation has been a common theme over the past couple of years, but it’s been generally settling down into the new Twitter order, which sets up the service as the ‘canonical’ timeline experience, and promotes developers which use Twitter’s data, rather than its stream of tweets.

In terms of platform innovation, Costolo says that he likes to “think of Apple as a mentor company to us. We like the way that they think about simplicity in design.”

In relation to Google Glass, Costolo says that it doesn’t matter whether this current iteration is successful or not, because Google is learning a lot and pushing the envelope.

Costolo was also briefly quizzed on his current relationship with Chairman and Twitter co-founder Jack Dorsey: “I think that Jack has an almost remarkable product sensibility and ability to clarify a product problem or a thought about a problem in a way that I’ve almost never seen before.”

Costolo points to Vine, which Dorsey discovered and alerted Costolo to, as an example of his ability to see something nascent that has huge potential. Dorsey stepped down as CEO in 2008, before Costolo was hired to replace Ev Williams. Since then, there has been plenty of chatter about the contradicting opinions and rough relationship between the two. But there was no sign of that here.

As far as what Costolo says that Twitter is missing, he says “simplicity”. “Bridging the gap between the awareness of what Twitter is and…going in and understanding what it is right away.”

That gap is what happens when you have people who are deeply invested in a platform, and others who find the complex jargon and mechanics of Twitter confusing. Costolo specifically called out the ‘period before a user name’ behavior when you want a reply to be seen by all as confusing. “Because of the 140 character constraint, users have created this remarkable language for communication,” he says.

“Public real-time conversational distributed” is where Twitter wants to ‘enhance its abilities’. That’s where Costolo says that they’re spending almost all of their time. This is one of the reasons that Costolo says that they haven’t put a lot of time into private group chat. It doesn’t fit into the ‘town square’ mentality that Twitter has about its products.

With regards to security, especially the high-profile hacking of brand and personal accounts, Costolo was somewhat contrite.

“We launched two-factor authentication, and our media team is working with tons of organizations around the world to help them make sure this doesn’t happen. It’s going to be an ongoing challenge for us and we’ve got a bunch of security people working diligently on it. It would be fair to say that we haven’t moved quickly enough there.”

The security question was, of course, tied into the  way that the financial industry is affected by real-time rumors and speculation. The AP account tweeting an incorrect rumor about an explosion at the White House, for instance, caused stocks to plummet.

“I think that we absolutely have a responsibility with high-authority accounts. We continue to invest significantly in that. Let’s be frank,” says Costolo, “we’ve created a platform that allows public, unfiltered conversation. These things have always happened. Frequently those things happened in a back room, or in private chats.”

Now they happen in public and on twitter, and there’s a bigger chance that they’re going to cause problems more quickly. In this way, Twitter’s strengths (its speed and its real-time accessibility) are also its weaknesses.

Read next: Tomorrow on TNW: Your chance to ask Dwolla's founder Ben Milne your entrepreneurship questions