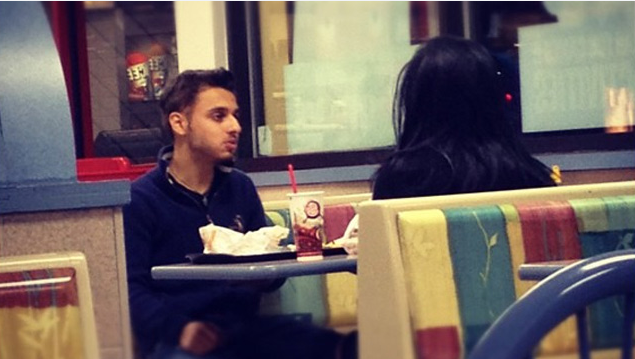 The revolution might not be televised, but your break up could every easily be tweetified if you’re not careful about who’s around hearing your every word.

One couple has learned that lesson the hard way, when the disintegration of their marriage in a very public branch of Burger King was captured using pretty much every social media tool at web developer, Andy Boyle’s disposal.

Forget about all the cool and interesting uses people have come up with for social media – Andy Boyle’s experiment has uncovered the next big thing. While your TV is home to reality shows, your Twitter feed is now home to reality literature.

Boyle started out with livetweeting the couple’s argument saying:

I am listening to a marriage disintegrate at a table next to me in this restaurant. Aaron Sorkin couldn’t write this any better.

Realizing he was on to something, Boyle didn’t stop tweeting, but rather started taking photos, posted on Instagram, and uploaded a video to yFrog. The final product looks like something that could have jumped right out of a Douglas Coupland novel.

It’s also a reminder that anyone with a smartphone has a virtual smorgasbord of spying tools in the palm of their hand – which should make us all think twice about every little thing we say or do in public!

To get the full effect of Boyle’s story, The Restaurant of Broken Dreams check it out Storified below.

There are more great finds from around the Internet every day at TNW Shareables.

Read next: Zwiggo: A promising collaboration and sharing Web app for public and private groups