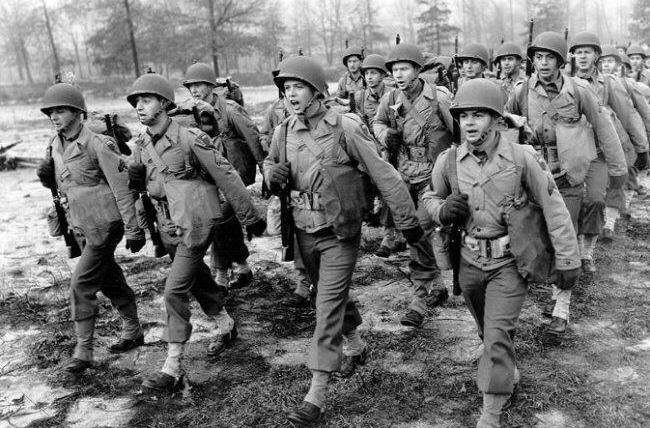 On August 31st, 1939, Hitler ordered the invasion of Poland with the first moves scheduled to take place at 4.45am the following morning.

During the night, German units posing as Polish troops attack a radio transmitter near the German town of Gleiwitz as a propaganda mechanism for justifying the subsequent invasion. And thus the war that became known as World War 2 was set in motion.

Since that day, the events of the 6-year war have been regaled across film, radio, theater, books, magazines…and now Twitter.

On August 31st this year, the Real Time WWII Twitter account sprung into life, reporting on events from World War 2 as though they were happening in real-time, 72-years to the day after the original events. Here’s the inaugural tweet:

Almost 300 tweets have been sent in the three weeks since launch, covering everything from British PM Chamberlain’s radio announcement that the UK was at war with Germany, to Russian and German armies conducting joint military parades. Some tweets even throw visuals into the mix to help illustrate the story.

It’s an interesting use-case for Twitter and I caught up with the man behind it, 24-year old Alwyn Collinson who is a former history student at Oxford University.

“Twitter seems perfect for this sort of coverage”, says Alwyn. “And I was really quite surprised that nobody was doing something like this already”.

Of course, similar endeavours have been attempted in the past. As we reported a couple of weeks back, the Guardian newspaper had launched a dedicated Twitter feed to mark the tenth anniversary of the 9/11 terrorist attacks. A mere 16 tweets into its ‘real-time’ coverage of events, the Guardian pulled the plug following severe criticism.

In our report at the time we quoted Iain Hepburn from a blog post, as a means of understanding why the Guardian’s Twitter feed had been received badly:

“Retweeting events as facts, as if they were happening now, strips that emotion and context away, boiling them down into just 140 character statements. We lack neither the immediacy of the events happening now, nor the distance of – say – the World War 2 tweets in a similar vein put out by the National Archive.”

Launching in early 2010, The National Archives UK War Cabinet twitter feed has charted the developments of World War 2 through tweeting the 1940 Cabinet papers, taking thousands of followers back in time to experience, again in ‘real-time’, key events from the war. Many of the tweets even link through to the original Cabinet paper which are available online.

And from January 2011 onwards, the Twitter feed’s followers were invited to take over the project, to research and tweet extracts from the 1941 Cabinet papers sending. So how is this different to Alwyn’s initiative?

“What @ukwarcabinet is doing is great, and I love their up-to-the-minute style”, says Alwyn. “But I think we’re doing completely separate things. They’re working from one excellent source (Cabinet papers), focusing on government decisions. It’s the top-down view of history, whereas I want to show WWII from the bottom up as much as possible – how ordinary people lived (or died) through the war. Also, they’ve got a very tight focus on Britain, whereas I want my feed to be more wide-ranging. They can’t really cover the Holocaust in any depth, for example”.

So there are similar endeavours taking place already, but Alwyn’s feed goes all the way back to day 1, is more extensive and is proving to be a good way to follow events as they unfolded over 70 years ago.

Regarding the criticism leveled at the Guardian over its 9/11 Twitter coverage, Alwyn says, “Hopefully that isn’t an issue with the Second World War, although there are plenty of contentious events which I’m hoping to cover respectfully and thoughtfully”.

The Twitter feed is partially automated, with Alwyn working a few days ahead, scheduling tweets via SocialOomph. “This lets me tweet events at the actual times they happened”, says Alwyn. “I have no particular desire to tweet at 4am – most major attacks during the Second World War started at dawn. It also lets me space non-time-specific events out through the day, so as not to overwhelm people with a massive dump of information”.

Sometimes, however, Alwyn jumps in throughout the day to add tweets if he receives feedback from followers. “I have a day job though, so I’m limited”, says Alwyn.

Alwyn’s information partly comes from books, but they’re mostly gleaned from the World Wide Web. “There are several very good timelines of WWII on the Web”, says Alwyn. “Plus digitized newspaper archives, personal stories, transcripts of speeches, and so on – anything that gives a fresh, unusual angle on the war”.

Alwyn’s goal is to give the feeling of breaking news to his tweets, so he says he’s trying to avoid talking like a history book. “I don’t want to anticipate the outcome of events, because I want people reading the feed to feel a little bit of what people at the time felt”, says Alwyn. “It’s so easy to fall into the trap of hindsight. At the time, people didn’t know that the Nazis were monsters, or even that the war was going to be a Second World War – they hadn’t started saying the First World War at that point, it was still the Great War, or the Late War. The New York Times published Nazi propaganda about Polish soldiers butchering German civilians and people believed it”.

It’s certainly an interesting initiative from the former history student, and he says he’s looking to focus on the ‘human’ side to the war as much as possible. “Stalin supposedly said A single death is a tragedy, a million deaths is just a statistic“, says Alwyn. “I think it’s impossible to empathize with the people killed if you just hear casualty numbers. But reading about a 12-year-old girl, seeing her older sister machine-gunned by aircraft which happened X days (and 72 years) ago, gives more of a sense of the horror and waste of the war. So I would like to highlight, as far as possible, the human suffering of the war – the cost to combatants and civilians on all sides”.

Twitter can be whatever you want it to be

Twitter was launched as a microblogging platform over 6 years ago, and it has been put to a number of quirky uses in recent times. Back in June we reported on London’s Tower Bridge Twitter bot, an entirely automated feed that romanticized life on the River Thames from the perspective of Tower Bridge. One tweet read: “I am closing after the SB Gladys has passed upstream”.

And there have even been a number of so-called ‘Twitter novels’ come to the fore. Back in August we wrote about Journalist Doug Sovern’s attempt to write a novel one tweet at a time. Entitled TweetHeart Novel, it’s the story of a young woman living on the streets of Berkeley, California. Over 1,300 tweets in, the tweetHeart novel is still going strong.

As for Alwyn’s historical account of the Second World War, it seems that education is a key use-case for this feed. “I’ve had a couple of history teachers contact me to say they’ve recommended it to their students”, says Alwyn. “Most of whom, of course, use Twitter or at least Facebook. To teenagers, the Second World War might as well have happened a thousand years ago. To show it in real-time, and as real people saw it, hopefully that will give a sense of living history, as opposed to impenetrable arrows on maps and obsolete politics”.

Since graduating, Alwyn has been working for a media company in Oxford. “I studied History at Oxford University which was probably the genesis of this idea”, says Alwyn. “I’ve been using Twitter for about 2 years now – in my first week in my current job my boss sat me down in front of it and said: ‘people keep on talking about this Twitter, make it work.’ I’ve been pretty impressed at how Twitter can provide an alternative perspective, giving a voice to people who are normally swept under the carpet by mainstream journalism, academia or politics. The Arab Spring is probably a clichéd example by now, but it’s still a good one. Hopefully Twitter can help broadcast the forgotten voices of history too, just a little bit”.

Alwyn doesn’t have a personal Twitter account because, he says humbly, “I’m not that interesting, and I expect to be quite busy for the next six years anyway”.

The future according to Alwyn

So, can we expect Alwyn to continue these tweets for the full 6-year duration of the war, up to 2017? “At present, I think I will definitely carry on to at least the invasion of France”, says Alwyn. “That’s next spring, and it’s pretty amazing stuff – the fall of Paris, retreat from Dunkirk, and so on. From there to the invasion of Russia shouldn’t be too difficult. After that, the war becomes huge, really impossible to comprehend from a single viewpoint”.

So whether this actually continues for the full duration remains to be seen. “Ideally I’d carry on for 6 years – I just hope that’s possible”, adds Alwyn. “I’d love to crowdsource some of the content – I can’t singlehandedly research all the fascinating stories of the war, and I’m really keen to get unusual perspectives, eyewitness accounts, forgotten heroism or tragedy, things that make people look at the war with fresh eyes. If people would like to email ([email protected]) or Tweet me (@RealTimeWWII) accounts they know of, sources I might not find myself for upcoming dates – that would be fantastic, really helpful”.

Read next: Litfy: Classic literature on your iPad browser