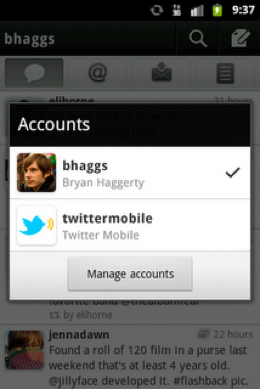 The Accounts pane allows you to switch between multiple accounts without logging out, allowing you to post from various accounts or check their streams without logging out. To enable push notifications in the new version of Twitter for Android, go to your account settings and turn on ‘automatic refresh’. Then you can choose to get push updates for Direct Messages, Mentions or Tweets. In a nice touch, the notifications for Mentions can be widened to include anyone, or narrowed to be just the people that you follow.

In addition to multiple account support and push notifications, Twitter has also updated the appearance of the home screen widgets and fixed some bugs. You can grab the latest version of Twitter for Android on the Android Marketplace now.

Read next: Amazon to release an Android tablet by October, two Kindles this year