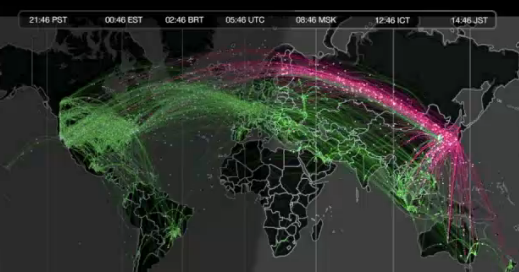 Twitter has posted a couple of very cool visualizations that show off the ‘global pulse’ of Tweets being sent around the world, especially when major events, like the earthquake in Japan, happen.

“We see this behavior during everything from sporting events like the World Cup to widely-televised news events like the royal wedding, and also in the face of major disasters like the March 11 earthquake in Japan,” states Twitter, “Where the volume of Tweets sent per second spiked to more than 5,000 TPS five separate times after the quake and ensuing tsunami. The videos below illustrate what this global flow of information looks like.”

The first of these videos shows the volume of @replies traveling in and out of Japan in a one-hour period just before and just after the recent earthquake. Twitter says that it saw a 500% increase in Tweets in the moments after the earthquake, as people reached out to communicate with family and friends. The visualization shows replies to Japanese users in pink, with messages coming out of japan to others in yellow.

The second shows the worldwide retweets of Tweets that originated in Japan, showing the spread of information from original Tweets through those who pass them on to others. The original Tweets are pink and the retweets are shown in green. You can see clearly how the original information coming out of the country is then spread out worldwide. Twitter says that this demonstrates how the service allows people to ‘view the world through each other’s eyes.’

“As a result,” it says, “we are able to share information and communicate more easily than any time in our past, bringing the world closer.”

Read next: An 80-page dissertation on what makes Instagram tick