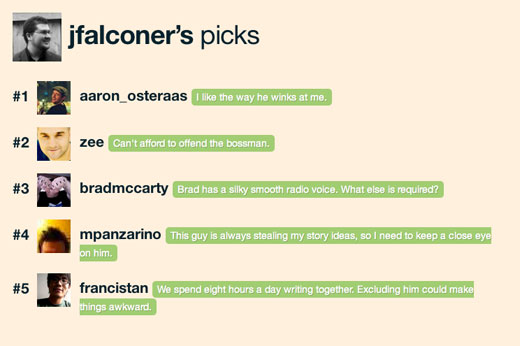 My Five is a small web app by Kyle Bragger, the man behind popular design social sharing site Forrst, that gets you to make up a list of just five people you would follow on Twitter if you were restricted to that number.

One of the greatest things about My Five is the number of tears it has the potential to produce, in the vein of our own Qwitter. If you don’t want to offend anyone, use overly flippant comments that ensure anyone who missed the list is relieved they weren’t included, like so:

Like every good app in this class, My Five has a leaderboard, so you who people wouldn’t want to do without the most. So far the results are the typical Twitterati, featuring the likes of Jack Dorsey and Robert Scoble in top spots.

It’s a tough job for anyone to get their following list down to just five people — particularly for those of us who are quite picky about our follows already. Can you do it?