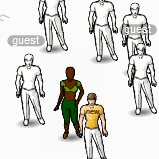 Twitter has just announced that it has acquired the team responsible for question and answer service Fluther.

The acquisition is an talent grab and does not include Fluther.com, a service that is something of a cross between Quora and Google’s Aardvark, connecting users asking questions to those who can answer them.

Announcing the deal, Twitter says: “During our conversations with Fluther’s team, we were continually impressed by their technical talent, entrepreneurial spirit, and much of the thinking behind the question-and-answer product they’ve spent the last couple of years building.”

While the Fluther team, consisting of four engineers and one designer, will now be joining Twitter, the Q&A product will remain a separate business unconnected to Twitter.

Fluther was started in 2006 by Ben Finkel and Andrew McClain, two men who lived in separate parts of the USA and by their own admission “Had never done a lick of web coding in their life”. Boosted by $600,000 funding, the company consolidated to San Francisco last year. Links to Twitter run some time back. The company’s Crunchbase profile notes Biz Stone as having been an advisor to Fluther since 2008.

Read next: My Blackberry Is Not Working!