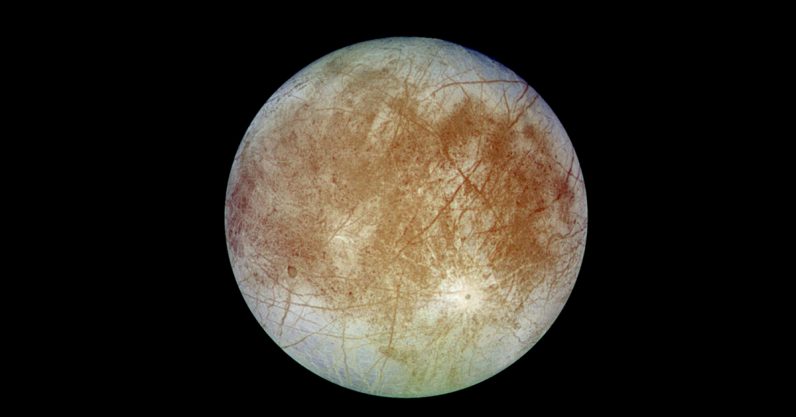 Laboratory experiments have re-created the surface of Europa, one of the four large moons of Jupiter, with a surprising result — Europa glows in the dark. While we typically see the side of Europa facing Earth, this new study shows what this world might look like from its other side.

This discovery is more than an interesting fact about the Solar System — it reveals secrets of the enigmatic moon.

Europa on the rocks

The icy surface of Europa is rich with salt, including magnesium sulfate (Epsom salt) and sodium chloride (common table salt). Each type of mineral radiates specific wavelengths of light when releasing energy. These studies found that salts within the icy crust of the Jovian moon can glow in the dark.

Europa is one of the water worlds of our solar system, holding a vast ocean under its frozen surface.

“[E]uropa’s ice shell is 10 to 15 miles (15 to 25 kilometers) thick, floating on an ocean 40 to 100 miles (60 to 150 kilometers) deep. So while Europa is only one-fourth the diameter of Earth, its ocean may contain twice as much water as all of Earth’s oceans combined,” NASA describes.

Gravitational forces between Europa, Jupiter, and its companions Io and Ganymede create cracks in the frozen surface. In some places, this ocean rises through these cracks in the ice. Therefore, by studying the outer surface of the ice, it is possible to learn about the hidden oceans of Europa.

Radiation from Jupiter raises energy levels of salt molecules as the moon makes its way through the planetary system. When these molecules relax, this energy is released as visible light.

“These high-energy charged particles, including electrons, interact with the ice- and salt-rich surface, resulting in complex physical and chemical processes,” researchers describe in Nature Astronomy.

As seen by the human eye, the surface of Europa would glow green, blue, and white, depending on the types of salt emitting light. The ice glowed strongest with green light similar to a typical green screen used in movie and video studios (including Astronomy News with The Cosmic Companion).

Higher concentrations of Epsom salt increased the amount of energy released within the ice, while sodium chloride and carbonate had the opposite effect.

As Europa orbits Jupiter, this tiny moon (slightly smaller than our own planetary companion) is bathed in high-energy radiation, including electrons.

As these electrons fall upon the surface of the icy moon, the incoming energy is released in the form of light, creating conditions where Europa glows in the dark.

“If Europa weren’t under this radiation, it would look the way our moon looks to us — dark on the shadowed side,” Gudipati said. “But because it’s bombarded by the radiation from Jupiter, it glows in the dark,” explained Murthy Gudipati of Jet Propulsion Laboratory (JPL).

The JPL team built a unique instrument — the Ice Chamber for Europa’s High-Energy Electron and Radiation Environment Testing (ICE-HEART) — to examine how organic material in a simulated Europa environment would react to radiation.

This discovery was a happy bit of serendipity for researchers.

“Seeing the sodium chloride brine with a significantly lower level of glow was the ‘aha’ moment that changed the course of the research,” said Fred Bateman, co-author of a journal article detailing the study.

In the video above, take a look at the upcoming Europa Clipper mission from NASA to explore an alien ocean in detail for the first time. (Video credit: NASA/JPL)

“Man cannot discover new oceans unless he has the courage to lose sight of the shore.” — Andre Gide

The Europa Clipper, NASA’s upcoming flagship mission to explore the Jovian water world, is due for launch sometime in the mid-2020s. This spacecraft will examine Europa during multiple flybys of the enigmatic moon.

Investigators are closely examining the capabilities of the instruments aboard the spacecraft to see how this study could aid that mission’s exploration of the frozen surface of Europa.

Onboard the spacecraft, the Europa Clipper Wide Angle Camera could collect a significant amount of data about salt concentrations on the icy moon.

This camera, utilizing a 4k x 2k CMOS detector, has a field of view of 48 by 24 degrees. From an altitude of 50 kilometers above Europa, details as small as 11 meters across will be seen as a single pixel.

It might even be possible to take images of the “night side” of Europa, glowing in the dark.

This study focused on Europa, but the findings may also be applicable to other large bodies in high-radiation environments, including Io and Ganymede in the Jovian system.

Europa is one of the most likely places in our solar system to find life. If any lifeforms are found on Europa — no matter how primitive — the discovery would signal that life is likely to form on worlds throughout the Cosmos.

Read next: Ultimate Cartoon Animator 4 can turn even non-artists into accomplished animators