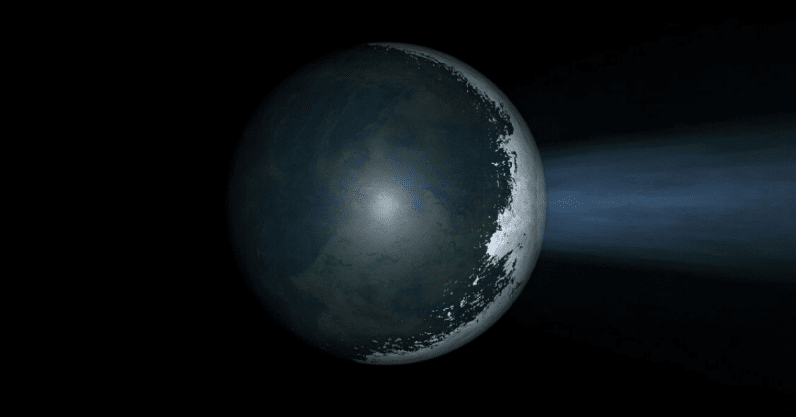 Kepler-160, a Sun-like star 3,000 light years from Earth, is accompanied by at least a handful of planets, including one world that may look something like home. Roughly twice as large as Earth, but half as massive, the planet KOI-456.04 orbits its local star once every 378 days (just under two weeks longer than a year on Earth).

A newly-discovered planet, KOI-456.04, may be almost twice as large as Earth, but with half the mass, potentially allowing it to hold onto an extensive atmosphere. Located well in the Goldilocks Zone, where heat from the local star is neither too hot nor too cold for water, KOI-456.04 could be home to lakes, rivers, perhaps even oceans. This region, also known as the habitable zone, is where temperatures are more likely to be suitable to the development of life.

Most super-Earths (worlds slightly larger than our planet) have been found around small, cool red dwarf stars. (Because red dwarfs are so small, planets passing “in front” of them, as seen from Earth, block out a significant amount of light, making detection easier for astronomers.)

The star at the center of this exoplanet system, Kepler-160, is much like the sun — just slightly smaller, cooler, and a little more red. If the atmosphere is something like our own, the light that would fall on the surface of the world could be much like that felt on a warm spring day. Nearly every exoplanet found so far orbits at a distance from its sun where mild temperatures could be common.

“The full picture of habitability, however, involves a look at the qualities of the star too,” explains Dr. René Heller, of the Max Planck Institute for Solar System Research (MPS) in Göttingen.

Prancing with the stars

Over the last 14 years, more than 4,000 worlds around other stars have been spotted by astronomers using the Kepler spacecraft, CoRoT, and TESS.

Most of the exoplanets discovered so far are several times more massive than Earth — closer to the size of Uranus or Neptune. However, some smaller, rocky worlds, similar in size to Venus and Earth, have also been seen in distant solar systems. And the most intriguing of these orbit their stars at the right distance for liquid water to pool on the surface of planets.

Red dwarf stars live for exceptionally long periods, allowing life plenty of time to develop on worlds surrounding them. But, they are also cool, emitting most of their energy as infrared radiation. And, these stars are also highly active, sending out stellar storms that could wreak environmental havoc on worlds huddled close to the stars for warmth.

Potentially habitable planets orbiting red dwarfs would also need to be so close to their star that gravity would significantly warp the planet itself as it orbited. This could fuel heat to drive chemical reactions, or the effect may drive widespread vulcanism around the planet, altering the global climate. Even planets larger than Earth could have their atmospheres driven off by pressure from their local star, reducing chances of life on those worlds. The video below shows a look at Kepler-160b, the innermost of the confirmed planets in that solar system.

The innermost-known planet in this star system, Kepler-160 b, orbits 20 times closer to its star than the Earth does to the Sun. This world, roughly 50 percent larger than Earth, orbits its parent star in just a little over four days.

This new study looks at the orbits of these worlds, suggesting that in addition to KOI-456.04, the system may also contain a fourth massive planet, orbiting around its parent star once every few weeks.

The next planet out, Kepler 160 c, takes nearly two weeks to go around its stellar parent. This world, nearly one-third the diameter of Jupiter, orbits just over one-tenth the distance between the Earth and Sun.