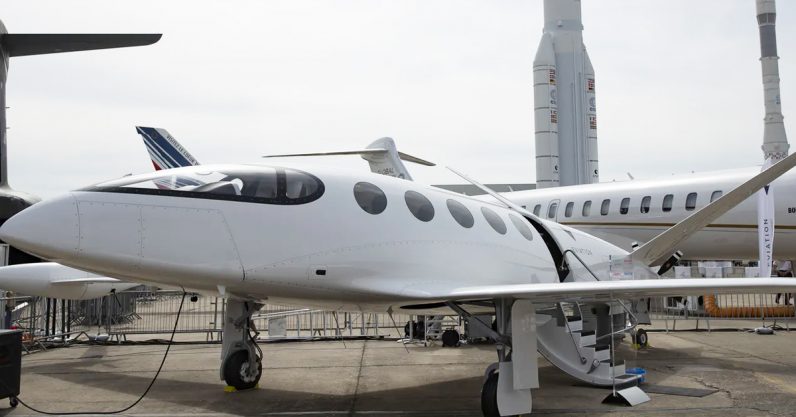 The UK government plans to ban the sale of new conventional petrol and diesel cars by 2040. Clearly the plan is for all citizens to be driving electric or hybrid-electric cars, or – better still – riding bicycles. But can electrification help cut emissions from that other carbon-intensive form of passenger transport, flying?

This is a complex question and one where size matters. It is possible for small aircraft to be powered by electricity. In fact, several companies are already developing small electric aircraft and they could come on the market within the next few years.

But for the large aircraft we all use more frequently, it is unlikely to happen anytime soon. The problem isn’t the propulsion technology but the energy storage. Jet fuel contains around 30 times more energy per kilogram than the most advanced lithium-ion battery currently available.

This trade-off is particularly bad for long-haul flights because the fuel makes up half of the aircraft’s weight at take-off. What’s more, a conventional plane gets lighter as the fuel is consumed, but an electric aircraft would have to carry the same battery weight for the entire flight. As I said, size matters.

For a five- to ten-seat light aircraft, fuel is likely to make up 10 percent to 20 percent of the aircraft’s weight. Simply swapping the fuel for batteries might still reduce the distance the plane can fly by an impractical amount. But replacing two or three passengers with additional batteries would give a range of 500 kilometers to 750 kilometers, compared to a fuel-powered range of over 1,000 kilometers.

However, there could be another option. Israeli firm Eviation recently revealed a prototype version of what it claims will be the world’s first commercial all-electric passenger aircraft. The aircraft, named Alice, doesn’t just swap jet fuel for batteries but is a whole new design concept that improves the way the propulsion system is integrated into the airframe. Carrying nine passengers with a range of 1,000km, Alice is expected to enter service in 2022.

Alice may be a practical alternative for small, regional journeys but not for most scheduled passenger flights, even short-haul ones. So how can electrification help here? Improving battery technology is one option. A new technology known as lithium-air batteries can theoretically reach the same energy density as jet fuel. However, they are still at the laboratory stage. Given the extremely safety conscious nature of the aviation industry, it is unlikely to plan future aircraft on unproven technology.

What we are more likely to see for short-haul flights in the next 20 to 30 years is hybrid aircraft that combine current turbofan engines with new electric propulsor systems. This more flexible hybrid system could be optimized to provide the high thrust required for take-off and the energy density needed for a long cruise.

This is an area being actively pursued in the E-FanX project, which involves Airbus, Rolls-Royce, and Siemens teaming up to develop a hybrid-electric propulsion flight demonstrator. Using a BAe 146 aircraft, which usually carries around 100 passengers, they plan to replace one of the aircraft’s four Honeywell turbofan engines with a propulsor fan driven by a two-megawatt electric motor.

In the project’s initial phases, the electricity will actually be supplied by a Rolls-Royce AE2100 gas turbine housed in the aircraft’s fuselage (main body). But the E-FanX will still be an important step in the evolution of hybrid electric technology. Airbus says it wants to make this technology available for 100-seat aircraft by the 2030s.

It’s also possible to equip a plane with multiple small electric propulsors in a so-called distributed propulsion system that is more efficient than traditional designs that use two large turbofans. This idea can be taken further by combining the separate fuselage and wings into a single “blended-wing-body,” more efficiently integrating the propulsors with the airframe in a more aerodynamic design. This could reduce the amount of energy the aircraft would need by 20 percent.

But neither of the world’s two main aircraft manufacturers, Boeing and Airbus, are actively pursuing blended wing technology. Such a major design shift has too many technical challenges to make it commercially viable right now. For example, most airports wouldn’t be able to accommodate a blended-wing aircraft.

Unfortunately, for the type of flights, most of us make there is currently no practical alternative to jet-fuelled turbofans. For this reason, the main aircraft engine manufacturers are investing heavily in improving their current engine technology. The International Air Transport Association estimates that each new generation of aircraft is on average 20 percent more fuel-efficient than the model it replaces and that airlines will invest US$1.3 trillion in new planes over the next decade.

For example, Rolls-Royce’s most recent engine, the Trent XWB that powers the new Airbus A350, is marketed as “the world’s most efficient large aero-engine.” Airbus claims the engine will help the A350 to achieve “25 percent lower operating costs, fuel burn and CO₂ emissions when compared with previous-generation aircraft.”

The next generation of Rolls-Royce engine, the UltraFanTM, will offer a further 20 percent to 25 percent reduction in fuel consumption and CO₂ emissions and is due to enter into service in 2025.

The number of air passengers is expected to double over the next two decades but so are total emissions so this is unlikely to make aviation a bigger part of the problem. Reducing aviation emissions by 20 percent per generation of aircraft probably might not be a sustainable improvement. But if hybrid aircraft are made a reality then flying really could become even less of a contributor to total emissions than it is today.

This article is republished from The Conversation by Duncan Walker, Senior Lecturer in Applied Aerodynamics, Loughborough University under a Creative Commons license. Read the original article.