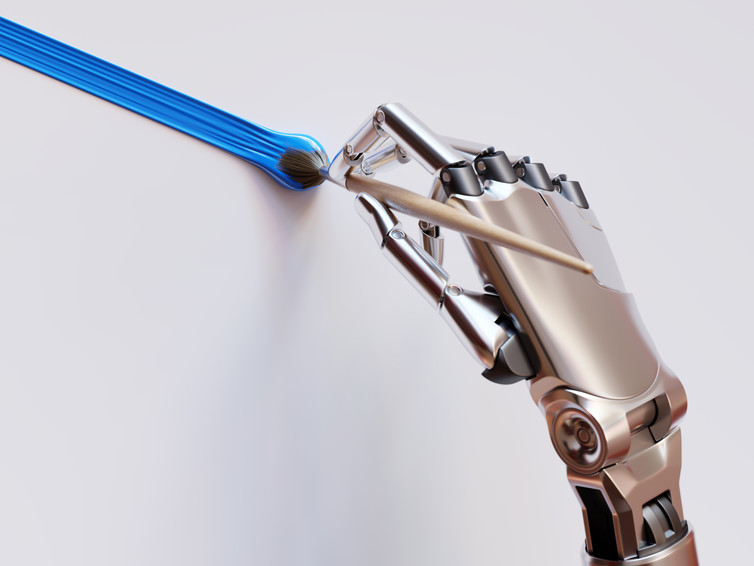 When a group of museums and researchers in the Netherlands unveiled a portrait entitled The Next Rembrandt, it was something of a tease to the art world. It wasn’t a long lost painting but a new artwork generated by a computer that had analysed thousands of works by the 17th-century Dutch artist Rembrandt Harmenszoon van Rijn.

The computer used something called machine learning to analyse and reproduce technical and aesthetic elements in Rembrandt’s works, including lighting, colour, brush-strokes and geometric patterns. The result is a portrait produced based on the styles and motifs found in Rembrandt’s art but produced by algorithms.

This is just one example in a growing body of works generated by computers. A short novel written by a Japanese computer program in 2016 reached the second round of a national literary prize. The Google-owned artificial intelligence (AI) firm, Deep Mind, has created software that can generate music by listening to recordings. Other projects have seen computers write poems, edit photographs, and even compose a musical.

But who owns creative works generated by artificial intelligence? This isn’t just an academic question. AI is already being used to generate works in music, journalism and gaming, and these works could in theory be deemed free of copyright because they are not created by a human author.

This would mean they could be freely used and reused by anyone and that would be bad news for the companies selling them. Imagine you invest millions in a system that generates music for video games, only to find that music isn’t protected by law and can be used without payment by anyone in the world.

Unlike with earlier computer-generated works of art, machine learning software generates truly creative works without human input or intervention. AI is not just a tool. While humans program the algorithms, the decision making – the creative spark – comes almost entirely from the machine.

That doesn’t mean that copyright should be awarded to the computer, however. Machines don’t (yet) have the rights and status of people under the law. But that doesn’t necessarily mean there shouldn’t be any copyright either. Not all copyright is owned by individuals, after all.

Companies are recognised as legal people and are often awarded copyright for works they don’t directly create. This occurs, for example, when a film studio hires a team to make a movie, or a website commissions a journalist to write an article. So it’s possible copyright could be awarded to the person (company or human) that has effectively commissioned the AI to produce work for it.

The current legal picture is actually more complicated, and it changes depending on where you live, as this is not an area that has been dealt with by international copyright treaties.

In the UK and other countries such as Ireland and New Zealand, computer-generated works do have copyright, which belongs to “the person by whom the arrangements necessary for the creation of the work are undertaken”. Other European countries lack similar provisions in their legislation, but various jurisdictions such as Spain and Germany imply that only works created by a human can be subject to copyright protection.

What’s more, case law from the European Court of Justice has declared on various occasions that copyright only applies to original works, and originality must reflect the “author’s own intellectual creation”. This is usually understood as meaning that an original work must reflect the author’s personality, which clearly means that a human author is necessary for a copyright work to exist.

In other jurisdictions, the situation is even more complicated. In Australia, certain case law has declared that a work generated with the intervention of a computer could not have copyright because it was not produced by a human. In the US, the situation is still open to argument, with various experts disagreeing on whether computer-generated works would be protected or not.

Things are likely to become yet more complex as AI tools are more commonly used by artists and as the machines get better at reproducing creativity, making it harder to discern if an artwork is made by a human or a computer. Monumental advances in computing and the sheer amount of computational power becoming available may well make the distinction moot. At that point, we will have to decide what type of protection, if any, we should give to emergent works created by intelligent algorithms with little or no human intervention.

The most sensible move seems to follow those countries that grant copyright to the person who made the AI’s operation possible, with the UK’s model looking like the most efficient. This will ensure companies keep investing in the technology, safe in the knowledge they will reap the benefits. What happens when we start seriously debating whether computers should be given the status and rights of people is a whole other story.

Read next: Pokemon Go for loners lets you catch virtual boyfriends and girlfriends