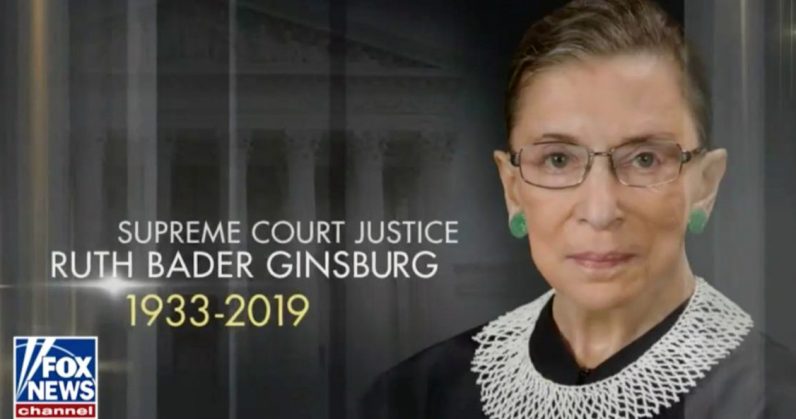 On Monday, the day before President Trump’s State of the Union Address, Supreme Court Justice Ruth Bader Ginsburg attended a performance celebrating her life at a museum in Washington — her first public appearance since December. It did little to convince the internet’s most morbid conspiracy theorists that she wasn’t dead.

Justice Ginsburg, or RBG as she’s known to her fans on the internet, underwent surgery on her left lung in December to remove malignant nodules, a surgery that doctors say went well before declaring her cancer free — again. It was her third bout with the disease.

In 1999, RBG underwent surgery, chemotherapy, and radiation treatments after she was diagnosed with colon cancer. She didn’t miss a day on the bench during her treatment. She went under the knife again in 2009, this time for pancreatic cancer. RBG’s tumor was discovered at an early stage, treated, and she was back to work 16 days after the surgery.

This time, at 85 years old, Ginsburg’s physician discovered cancer in her lung after a fall that resulted in three broken ribs. She had surgery December 21. Days later, on January 7, she missed her first case on the bench as the Supreme Court re-convened for 2019. It was the first time in her 25 years on the Supreme Court that she’d missed oral arguments for a case. That’s when the rumors started to fly.

By most accounts, the first inkling of RBG’s death seemed to seep out of 4chan, the same message board that gave rise to QAnon — a group of conspiracy theorists alleging a deep state plot seeking to undermine President Trump and his supporters. Supporters of the theory have made wild accusations of child sex trafficking rings involving notable Hollywood stars and high-ranking government officials; allegations that North Korean leader Kim Jong-un was a puppet ruler installed by the CIA; and that President Trump feigned Russian collusion to enlist the help of special prosecutor Robert Mueller to expose the alleged misdeeds of Barack Obama, Hillary Clinton, and George Soros.

The group aimed for a rise to prominence, taking fringe conspiracy theories mainstream and pushing over-the-top accusations into national headlines. It’s unclear if the creators actually believed any of the falsehoods they were peddling or if they did it for the lulz. For any movement originating on 4chan, both are equally likely.

Q, the group’s anonymous leader — an homage to the top-secret “Q” clearance that grants access to nuclear weapons data among other highly secure information — first suggested that Ginsburg’s absence was part of a liberal cover-up to hide her true condition. “What ‘off-market’ drugs are being provided to [RBG] in order to sustain her minimum daily function?,” the individual(s) wrote.

Jacob Wohl, a far-right conspiracy theorist, kicked it up a notch by predicting Ginsburg would retire on January 11. She did not. Wohl responded by pivoting to the current conspiracy theory du jour that she was actually dead. He demanded video of Ginsburg doing a sudoku puzzle as proof of life. He then pushed an online petition to impeach Ginsburg. It failed to meet its 5,000 signature goal.

So RBG showed up to a theater but didn’t show for the SOTU? Okay. #WheresRuth

But if you thought RBG’s public appearance on Monday — an appearance confirmed by numerous people in attendance — would smolder the flames, you’d be wrong. There are still large segments of the public who believe her to be dead. On Twitter, the hashtag #WheresRuth is among the auto-suggested topics in search, and the hashtag trended nationwide during parts of January.

On Facebook and YouTube, you need only type “Ruth Bader Ginsburg” into the search field to be met with morbid suggestions of her death — an algorithmic error, to be sure, but one none of the major platforms have taken the time to address. Clicking any of these results leads to thousands of users stirring the pot with memes, jokes of the most morbid variety, and demands that government officials provide proof of life.

They’re unlikely to get it. Proving a conspiracy theory false lends legitimacy to those peddling it. Although Fox News may have already handled that after it aired a graphic implying Ginsburg had died during an episode of Fox & Friends. The graphic flashed on the screen for a few seconds, before cutting to host Ainsley Earhardt. She later apologized for the error.

At this point, you really have to wonder whether an on-camera Ginsburg sighting would be enough to kill the rumors, or if it would just spark more of them.

Edit February 12 9:47 CST: We incorrectly stated RBG had surgery in November. It was actually December.

Read next: After the US, Twitter faces wrath from India’s right wing over alleged bias