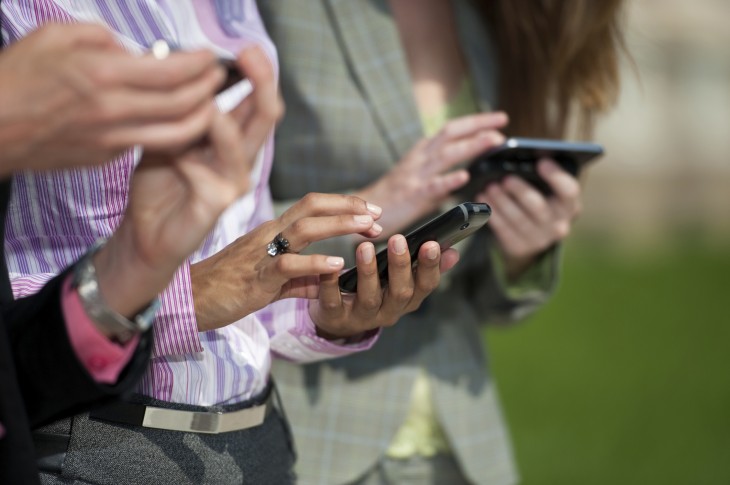 Last Christmas, I visited my parents in Wisconsin and gave my dad his first smartphone – a brand new iPhone 5. But, of course, he never got beyond the dial keypad, using the supercomputer in his pocket only to call me and my mother. (He did recently discover texting, but uses it more like snail mail, checking it no more than once a day.)

Aside from learning to never buy my dad a phone again, I thought of current social networks adapting to mobile. Like my dad, many simply transfer the original version (or habits) over to the new device, without capitalizing on the powerful capabilities coiled up inside the biggest technological innovation of our generation.

It is no secret that mobile is the future for social. Over 73 percent of Facebook users primarily access it through mobile, and mobile now accounts for more than half of its ad revenue – and we have only just begun to tap into this potential.

Today, more Americans adults have smartphones than those who do not. Desktop-chained social networks will become the landline phones of the next decade. Beyond just developing a mobile compatible version of a social network, however, successful future networks must meet consumer-generated criteria in order to stay competitive and maintain relevancy.

In 2014, local, instant, visual and everywhere will emerge as the four critical elements that will drive usage, engagement and success (or failure) for every social network. Emerging companies must integrate these trends in order to break through the noise, and existing networks must adopt in order to stay pertinent.

Social networks must be LIVE: Local, Instant, Visual and Everywhere.

Mark Zuckerberg once said, “A squirrel dying in front of your house may be more relevant to your interests right now than people dying in Africa.”

People desire to know what is happening around them now, wherever they are, and smartphones finally give them that superpower. While some major apps have begun to integrate targeted location-based capabilities such as locating nearby friends or local updates, most have yet to do it successfully and sustain momentum.

Access to current and timely information is crucial to keep the community engaged, informed and entertained. The most compelling change brought by smartphones is that it is effectively putting a powerful computer into our pockets, creating the perfect medium to retrieve information in real-time at any given moment.

A live stream of updates as seen in Twitter or Instagram demonstrates the latest expectation from consumers. Just as important is that we don’t even have to remember to re-open our “pocket computers” at a given moment because push notifications are like a doorbell in our pocket, reminding us whenever there’s something we should pay attention to.

Pictures are worth one thousand words, says a popular Chinese proverb. Social networks, in their simplest forms, are just communication mechanisms between groups of people.

Pictures are the highest value form of communication and thus social networks need to take advantage of the fact that smartphones give users 24/7 access to a camera (Barker and Manji, 1989). Snapchat quickly rose to fame with its photo-only interface and the recently-launched Jelly has followed suit.

While both may provide a demanded service, viability will depend on successful integration of more factors than simply focusing on photo sharing.

Too often, people get stuck in the Silicon Valley bubble and create products that are great for a tech-savvy San Francisco resident, but totally irrelevant for somebody from the Midwest (this too, a lesson learned from my father, proudly born and raised in Middleton, WI).

To be big, it has to appeal to and be accessible to people everywhere. Four-billion-dollar company Pinterest is one of the best recent examples of a startup that quickly proved mainstream popularity, by focusing and growing in Iowa first. Facebook is another obvious example of this, as users all over the world have a shared desire to connect to and keep in touch with one another.

So how do today’s social networks stack up in these four focus areas?  Here is a look at how Facebook, Twitter, Snapchat and Instagram rate (on a scale of 1-10, 10 being excellent) against these criteria:

These popular social networks, and others, will be overtaken by new ones if they do not adopt critical, mobile-unique elements.

A text-heavy network should be worried about being overtaken by one that is mostly images. A network that ignores location and GPS technology should worry about losing to one that shows relevant location data.

A balance among all four features exists and ultimately, this balance of local, instant, visual and everywhere will be the key to the rise of the next big social networks.

Well? How does your product measure up against the giants?