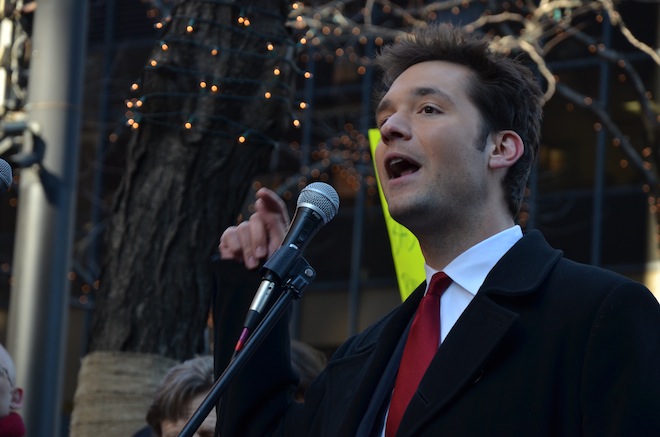 Entrepreneur and angel investor Alexis Ohanian, probably best known as one of the co-founders of reddit and evangelist of HipMunk, took the stage at The Next Web Conference this morning to profess his love for the Internet.

We kind of already suspected that Ohanian was a fan of the Internet, but he shared an interesting view on where he thinks the Web is going, and how close it came recently to getting censored by elected U.S. government officials.

These are my notes from his talk (slightly paraphrased here and there):

When reddit was started, we just graduated from college. Social media wasn’t a term yet, Facebook was only available for college students, and Delicious hadn’t yet been ruined by Yahoo.

Nowadays, we can use social media to see what people are having for breakfast all over the world. That sounds ridiculous, but it’s the same technology that lets you see revolutions and gives you access to locations that you wouldn’t be allowed to enter in real life. An open Internet has quickly become the most efficient marketplace for ideas the world has ever seen, and a catalyst for startups, non-profits and, yes, revolutions.

This notion of a meritocracy, however, doesn’t really exist in the real world, but it does on the Internet. I recently spent some time hanging out with entrepreneurs in Egypt, which was a genuine privilege. Some people say startup founders are revolutionaries, but I don’t think that’s true for most of them.

In Cairo, I met a startup called Bey2ollak that aims to solve the atrocious traffic problem that plagues the city, by crowd-sourcing realtime traffic data. It shows how entrepreneurs can come up with really innovation solutions to problems, without government interference. Already, the’re seeing thousands of downloads, and they’re expanding to more cities and countries.

This is an example of what can happen on the Internet because it’s an incredibly level playing field. What concerns me is how to get people on the field. That requires Internet access but also the ability and environment to create and innovate.

January 18, 2012, was a watershed moment for the Internet. That day, we saw the strength of the Internet, and how a critical mass of people that voice their opinions online can dictate what’s news, and have a direct influence on what people and mainstream media talk about.

There was a story that wasn’t being covered until people just kept talking about it online again and again and again, and then things changed. It shows how people on the Internet can guide what’s really important and create talking points in the media, and it’s not something we can take for granted.

It used to be that large information providers dictated what was newsworthy. What has changed now is that we can basically all make news, and in aggregate get enough attention to make or spark changes.

The world is not flat – NASA looked into it. However, the World Wide Web is flat.

This was all challenged by two bills that were proposed by U.S. officials, namely SOPA and PIPA. We did a full technical analysis of the bills on reddit, and found that they were very prohibitive and in fact would have prohibited sites like reddit and other sites leveraging user-generated content.

How did this all happen, and what could we do about it?

U.S. Democrats and Republicans both agreed that the bills should be passed and co-sponsored them, in a time where the parties didn’t agree on anything.

So the Internet took notice, realized this could actually happen, and went ‘challenge accepted’.

What followed was this groundswell of excitement and discussion. I even went to Washington to talk to elected officials about this, and asked redditors how my argument should be crafted, as I would only have 5 minutes. Should I tell the story from an entrepreneur’s perspective, or make a broader argument about censorship clashing with American values?

Reddit made it clear to me that my argument should instead center around jobs and economics, and the risk of job losses as a result of the bills, Internet being a growing industry in a time where so many other industries were shrinking.

I had a bunch of meetings, and you can tell how serious we took this because we dressed up and everything. Tumblr got into the discussion by blacking out user content, random people started acting like startup founders, and even Bieber got involved – and you don’t want to piss off Bieber fans.

We saw wonderfully simple things kicked off by real people. The whole SOPA/IPA ordeal was often positioned as Silicon Valley versus Hollywood, which may be a great soundbite but wasn’t actually true. Thanks to a lot of enabling software, we saw great innovation, social media sharing and phone line flooding of government officials by random people, who are essentially their voters.

The Internet rose to the opportunity to say: you work for us voters, and not the other way around.

Elected U.S. government officials were admitting that they didn’t understand technology well enough but would still pass those bills. That’s crazy, how could this be possible? We were asked to testify before the House, but this was called off, and instead the Internet showed up in what must have been the geekiest yet very articulate protest in history.

We then famously had subredditors asking us to take down their site sections, and then we went completely dark. Mainstream media really picked up on things when Wikipedia did the same thing, and I was invited to talk to media all over the country to deliver my soundbites and explain why the bills were such a bad idea and that they should not pass.

So we now know voters can triumph over lobbying dollars. But the fight is very far from over, and I can’t stress this enough.

Not long after the SOPA and PIPA bills were shelved (not terminated), attention went to ACTA. We haven’t won that fight yet, but the majority of government officials in Europe have turned to opposing ACTA. It’s up to us to keep telling our stories and stand up for the things we all believe in.

As technologists, we should urge people to grasp values like free speech and privacy, even on the Internet.

It’s amazing to me that a company can take a small investment from an organization like Y Combinator – like reddit did – and turn into a billion-dollar company like Dropbox. I mean, that company started on a laptop on a bus.

We never thought reddit would become as big as it is today when we started the site, and we only spent $500 on advertising in 6 years to get there. I’m a fan of HipMunk because it solves problems for users frustrated with existing travel booking sites.

I’m optimistic. When we started reddit, it was a different world, and way harder for people to spread ideas and words. We went from a desert to a jungle.

Look at Louis CK charging $5 for a DRM-free video and making a million dollars in just a few days. It’s such a great time to be an artist or content creator. Look at Airbnb disrupting the travel space, things like RideJoy for cars, Skillshare for learning, Gobble for cooking food, AngelList for raising funding and obviously Kickstarter for the financing and creation of basically anything.

The bar has been set low for the status quo. We can do exceptional things for other people thanks to the Internet, so we need to strive to make it a better one. I believe most people in the Internet are and can do good, and that they will win the fight.

But it’s an ongoing fight – there’s still more work to be done.

Read next: Appvetica turns the iPhone and iPod Touch into a controller for Wii-like iPad gaming