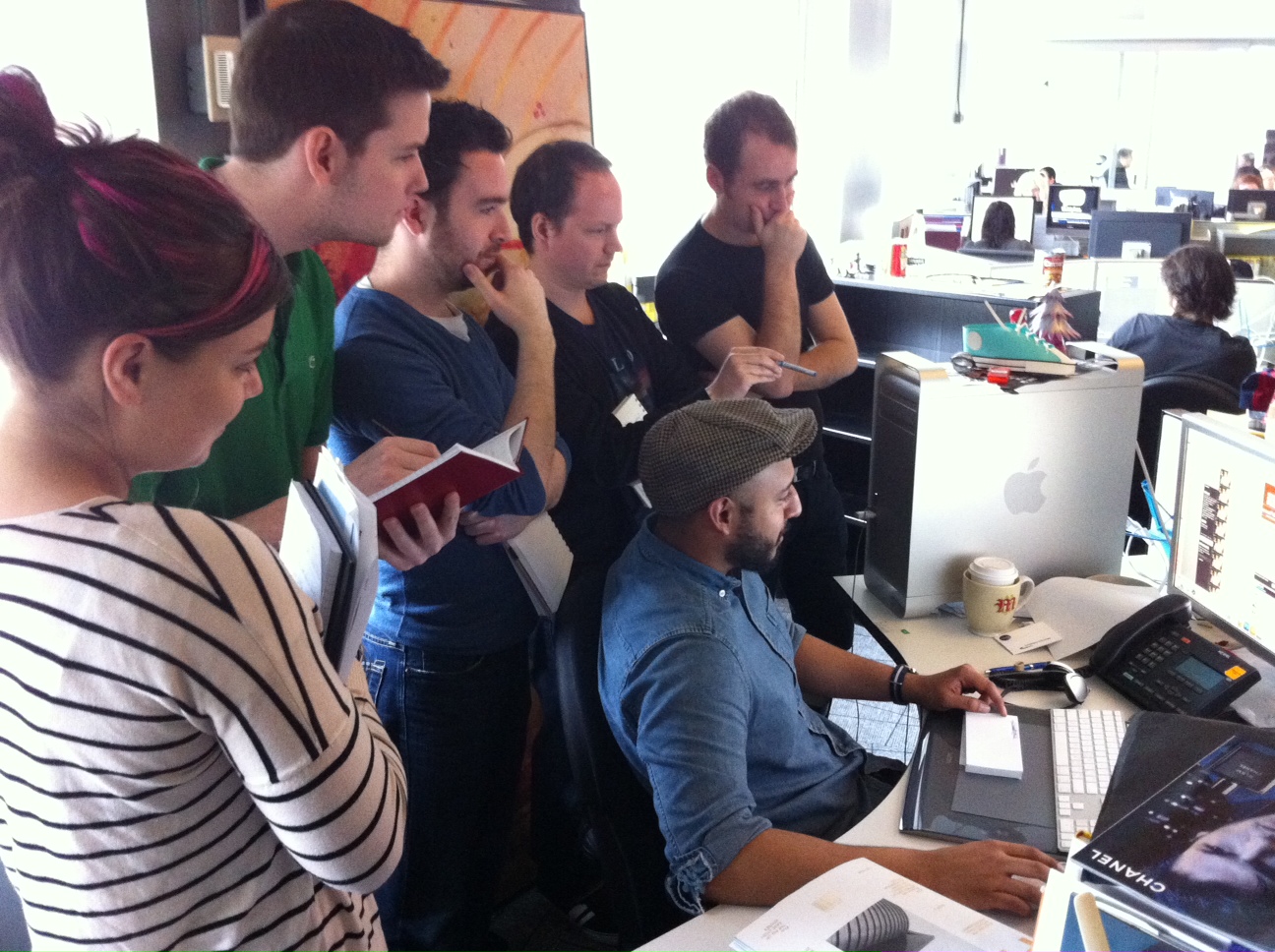 Welcome to our twenty-eighth Tumblr Tuesday, where every Tuesday we celebrate our love of Tumblr by interviewing the mastermind behind a new blog. Tumblr, a New York City based startup, is like the FFFFound for the rest of the world. It’s as shareable and fast-paced as Twitter but populated with more inspiring text and rich images.

In January, we announced that Tumblr serves 120 million people and 15 billion pageviews every month! But Tumblr’s founder and CEO David Karp admits that one area the blogging network hasn’t performed well enough at thus far is content discovery – which is what our weekly column Tumblr Tuesday is all about.

While I work in the tech industry and am surrounded by handsome, brilliant geeks all day long, I somehow always find myself dating Ad Men! (Yet, I still don’t know how to use Photoshop.) So when I stumbled upon the Tumblr, Hovering Art Directors, I LoLed. It’s so true. Art Directors love to hover; especially in skinny jeans and buttoned shirts from Steven Alan or beanies and long sleeves. They can be found looking over your shoulder, holding a latte and watching as you pump your creative juices. I wonder if it helps Art Directors think or prevents them from falling asleep.

For this week’s TT, we reached out to Jacqueline Law, an Art Director/Designer at Bartle Bogle Hegarty and the creator of Hovering Art Directors.

CBM: Who is the evil genius behind Hovering Art Directors?

CBM: What inspired you to make this Tumblr?

JL: For anthropological reasons and an ounce of vengeance.

CBM: How many total posts do you have? And how many people follow your blog?

JL: The idea started when I noticed I had inadvertently snapped a small collection of guilty hoverers at work on my phone. Once the Tumblr was set up, the submissions poured in. The Tumblr has been on an indefinite hiatus but miraculously, with 140 posts, the site has caught the attention of over 4,000 followers from around the world. And the submissions are still coming in…

CBM: Why do you think Art Directors notoriously hover?

JL: I’ve heard, “Those who can’t design, hover.” I kid. I think Art Directors are more prone to aggressive hovering because they need be reassured everything looks as good as they can be.

CBM: How does it make you feel when people hover over you?

JL: It’s like the feeling you get when you’re a kid, instructed to go up to the black board, in front of all your peers, to solve a complicated math equation. You can feel all their beady eyes on your back; watching your every minuscule move, cough at every mistake. You start to sweat profusely for no reason. Now, of course, I’m a seasoned pro, with the occasional sweats.

CBM: How long does it take you to notice now when you’re hovering over other people?

JL: Before the Tumblr took off, people weren’t as aware of their hovering as they are now. But I think once your nose is pressed against the screen, it’s time to back off.

JL: Boys. Wonder what Freud might think of that?

CBM: Which city hovers the most in the U.S.?

CBM: Do people from other countries hover?

Apparently this has been going on for quite some time…