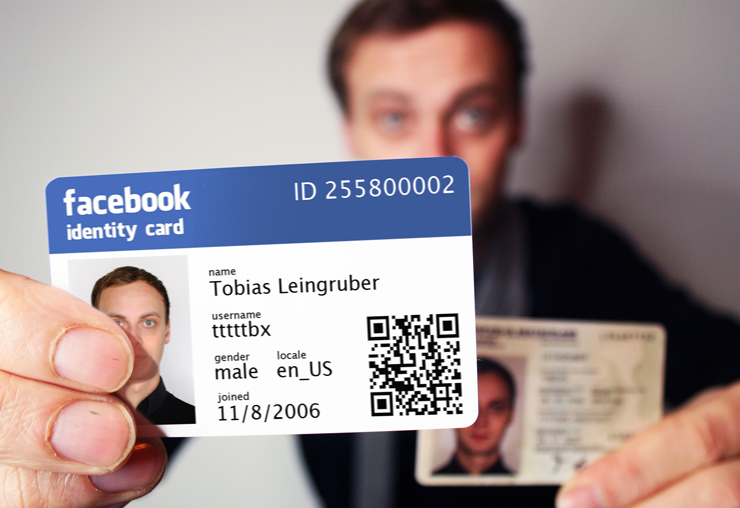 With a project that might seem like a novelty to most and a slight possibility for the future to others, German artist Tobias Leingruber has created, and is distributing, ID cards with your Facebook information on them.

The project is called FB Bureau, and Leingruber is handing out these futuristic identification cards at conferences in Berlin and Amsterdam next month.

Governments like Germany have released new passports that offer online identity checks as well, but they will likely never succeed with their technologies given the already existing structure of Facebook, powered by lazieness (or convience). The other way around though – A future where a Facebook Identity becomes more important than any governments’ doesn’t seem unrealistic. This possible future is already half-way there. What is exciting about this, what can be our role as artists and why should one even bother? Let’s find out!

What type of information does the card include? No Facebook ID would be complete without your real name, username, gender, location, and the date you joined the social network. In addition to this info, the card has a handy QR code that will send people right to your profile.

While this identification card is pretty much useless for purposes other than vanity, Facebook Connect is easily the most popular way to connect to websites today and could become quite useful for real-world signups in the future, such as payment systems. Some think that you may even be able to vote for the President using your Facebook credentials one day.

All of this futuristic stuff might be a few years off, but Leingruber’s project definitely has us thinking towards a day where you might be asked for your Facebook ID card when trying to enter a bar or airport.

Tell us what you think about your Facebook identity in the comments, do you think the social network could become a universal identification system in the future?