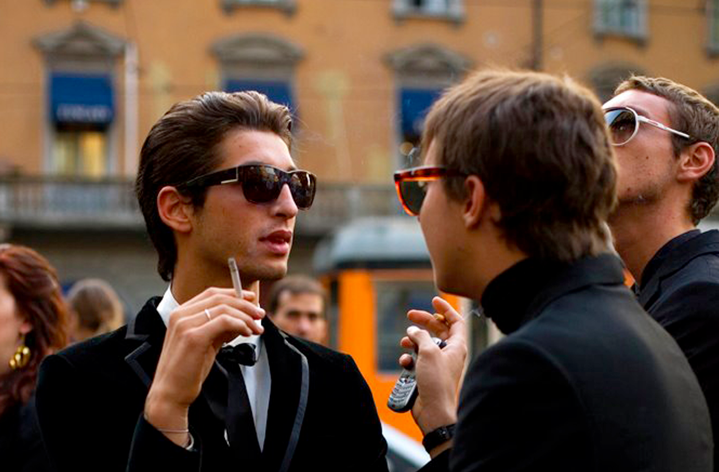 Welcome to our seventeenth Tumblr Tuesday, where every Tuesday we celebrate our love of Tumblr by interviewing the mastermind behind a new blog. Tumblr, a New York City based startup, is like the FFFFound for the rest of the world. It’s as shareable and fast-paced as Twitter but populated with more in-depth text and rich images.

On September 9th, 2011, we reported that at an average of 37.5 million daily posts, Tumblr reached its first mega milestone of 10 billion posts. While it’s likely doubled that number by now, Tumblr still never ceases to amaze me. Just the other day, Claire Mazur, CEO of Of a Kind, a New York City fashion startup pointed out the sexy, snarky and downright hilarious Tumblr blog: Real Men Swear. Its like the writers from The Onion went to town on The Sartorialist blog. Genius.

Now, let’s meet the gentleman behind Real Men Swear: Michael Kiser, a writer, and Craighton Berman, a designer and illustrator, both from Chicago.

CBM: Who are the gents behind Real Men Swear?

MK + CB: We’re friends and we work together and we’re kind of pricks to each other a lot.

CBM: What are your day jobs looking like these days?

MK + CB: We both work for a design and innovation consultancy, but who gives a shit.

CBM: What was the inspiration for Real Men Swear?

MK + CB: Having a bad attitude and unbearable envy mostly.

MK + CB: What is this, some kind of fucking gender politics blog? Wear some plaid and call it a day. That goes for girls too.

CBM: About how many followers do you have?

MK + CB: Coming up on four thousand right now, which is incredible considering we just made that number up.

CBM: Has anything awesome happened to you as a result of your Tumblr?

CBM: So, you both seem to swear quite a lot.

MK + CB: I can’t wait to hear my child’s first curse words. Hopefully directed at Miley Cyrus’ coke habit. Or whoever her replacement is in 5 years.

CBM: What other Tumblrs do you love?

CBM: How are you celebrating the holidays?

Read next: These are the top 10 most visited mobile sites of 2011