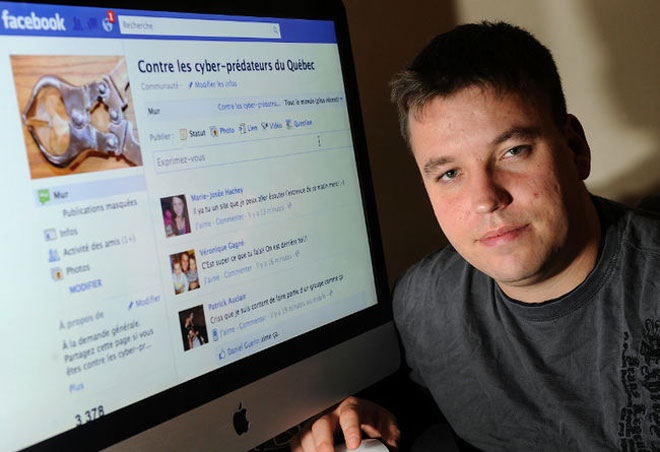 There’s something sort of creepy about the fact that Dany Lacerte, a father living in Quebec City, is posing as a 13-year-old girl on the Internet. I suppose his behavior can be excused when we look at the bigger picture, however, and see that he’s actually been using this false persona to try and expose cyber predators online through Internet social sites.

Perhaps unfortunately, Lacerte’s underage masquerade might soon be coming to an end. Although he’s reportedly been able to catch around 5 predators a day — some of which he’s managed to film over an Internet video chat site — the predators themselves aren’t very happy with the surprise intrusions. A few of the videos Lacerte has captured have made their way onto YouTube, thereby incurring the insulted wrath of his unsuspecting “victims”.

One of the men accused by Lacerte is demanding a public apology, threatening to launch a defamation suit if Lacerte does not deliver. On this topic, Lacerte states:

“[The lawyer’s letter] says that it’s illegal to create a fake account and the man thought he was trying to meet an 18-year-old girl.”

Over 15,000 users have already rallied behind Lacerte’s Facebook page where he today revealed his agreement to receive pro-bono legal assistance in the matter. The provincial police also seem to be getting something out of these vigilante endeavors and have already asked to view Lacerte’s recorded footage, including requesting copies of the chat logs between him and the supposed Internet predators.

A few of the stories Lacerte shares are rather shocking, though perhaps not unheard of on the Internet. In a few statements to QMI, Quebec’s new national news agency, he says:

“One time, it took two minutes before someone offered me [sexual] favors. I have two younger daughters. The police need to have a squad dedicated [to online predators]. I’m doing this to raise awareness about the people who are around us.

Interestingly enough, Lacerte created the false persona a few years ago after being inspired by QMI’s French investigative unit when it successfully did the same. QMI was able to curate over 50 predators within its first 2 minutes of using an Internet meeting site while posing as a 13-year-old girl named “Helodie”. Lacerte, who soon forgot about the creation of his own vigilante profile, returned to it years later only to find that over 150 people had contacted his own fictitious 13-year-old girl.

Out of these messages, Lacerte estimates that most of the men reaching out are around the age of 25. On this, he adds, “It’s like they don’t realize that it’s illegal. They think that at 25, they still have the right to do that.” I’ll be keeping up with this story, and will keep you posted, as usual.

In the meanwhile, what do you think? Is there something wrong about the way Lacerte is exposing these men online, or is he completely in the right? Could this be considered an invasion of privacy? Weigh in below.

Read next: Apple is now allowing all-you-can-eat gaming subscriptions on the App Store