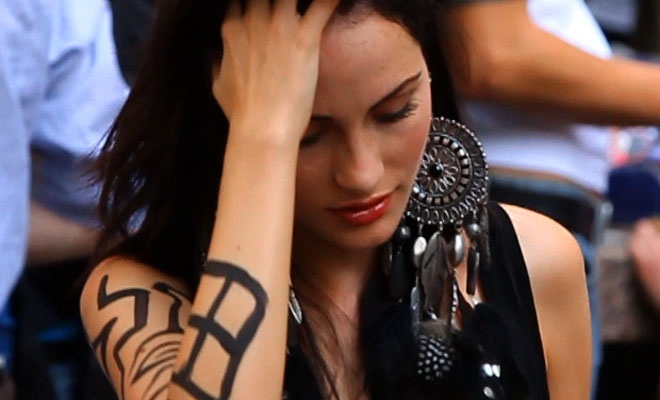 Welcome to our twelfth Tumblr Tuesday, where every Tuesday we celebrate our love of Tumblr by interviewing the mastermind behind a blog. Tumblr, a New York City based startup, is like the FFFFound for the rest of the world. It’s as shareable and fast-paced as Twitter but populated with more in-depth text and rich images.

On September 9th, 2011, we reported that at an average of 37.5 million daily posts, Tumblr reached its first mega milestone of 10 billion posts. Some of these Tumblr blogs have gained almost cult-like followings with hyperactive members who regularly contribute new content.

Hot Chicks of Occupy Wall Street is one such Tumblr with a rabid community and fan base featuring “hot chicks” participating in the current social movement. The blog is run by Steven Greenstreet, a 32-year-old Documentary Filmmaker from Washington DC who saw his Tumblr erupt with activity after posting his short documentary of the gorgeous women attending an Occupy event at Zucotti Park. Greenstreet claims that although he took on this blog as a sort of pet project from the beginning, he now sees that it’s gone above and beyond his expectations. After hopping on the opportunity to speak with him, it turns out that he is surprisingly good-natured and humorous — despite several threats from “crazy people” against his hobbies or interests, of course.

Take a peek at our conversation below.

Sherilynn Macale (SM): Do you have a personal interest in Occupy that drove you to start your Tumblr?

Steven Greenstreet (SG): I watched a short documentary on Occupy Wall Street called “Right Here All Over”. It was a beautiful and very informative video. Talking about it with my friend, I commented: “Those interviews with hot chicks didn’t hurt either.” My friend immediately said, “Dude, let’s go with that. Let’s make a video that is ENTIRELY made up of hot chicks at Occupy Wall Street.” 24 hours later, I took a train to New York City, filmed for 3 hours, and the rest is history.

SM: Why do you think your Tumblr is particularly appealing?

SG: Well, obviously, if my Tumblr site was called “The Beauty and the Intelligence of the Feminine Presence at Occupy Wall Street”, no one would be visiting the page. And those who did visit the page, would be those I would refer to as “the choir”. Those already sold on the message of OWS. I wanted EVERYONE to see our title and click it. From liberal progressives to apathetic frat boys.

“Hot Chicks” is almost a challenge to the potential viewer. It makes them say “I’ll be the judge of that” and then they click and watch. And, at least the video, is actually a wonderfully uplifting and inspiring piece. So, I’ve reached beyond the target demographic and made them watch something they would have never watched before. Mission accomplished.

SM: When did you realize that Hot Chicks of Occupy Wall Street started getting popular?

SG: When I saw large blogs and publications dedicating print space and air time to talk about the Tumblr site and how much it upset them, that was when I knew we had truly gone viral. When people all over the internet start talking about how much they hate you, you’ve reached the upper echelon of success.

If you look at my resume, this isn’t the first time I’ve ruffled some feathers with a film or video. I point to my first film “This Divided State” and my last film “8: The Mormon Proposition” as two classic examples where people obsessively tried to discredit my work or the films themselves. Newspaper headlines and TV news reports went on for weeks. And, thus, the films became viral talking points. The saying goes “Haters gonna hate”. Well, I say “Haters gonna help.”

SM: Let’s talk about your favorite posts. Do you have any?

SG: No contest, my favorite posts are the voices of the “hot chicks” themselves and their families. One post is from the Egyptian woman in my video and the other is from the mother of one of the women who appears in both my video and in a picture on my site. They absolutely loved what I had done. And they saw my true intentions: To celebrate the power and beauty of the women occupying Zuccotti Park.

SM: Have you actually been out to any of the Occupy events, and do you have any memorable stories to share about your experiences there?

SG: Filming “hot chicks” was my first and only time out to the Occupy movement. And given recent threats sent to me from crazy people who think it’s more productive to fight Steven Greenstreet than Goldman Sachs, I might sit this one out for a while.

SM: Where do you see your Tumblr going? And do you think Occupy will end anytime soon, and what do you plan on doing with your Tumblr in the event that it does or does not?

SG: I’ve already had a number of Tumblr fans submitting their own pics from Occupy events around the country and I’ve uploaded them to the site. I’ll continue to post pics and updates for a while but, to be honest, this whole thing already went above and beyond my expectations. We had an idea and we jumped at the opportunity. Seeing that idea flourish into a viral brand that’s making waves around the globe, well shucks, that just doesn’t happen every day, does it?

The video that started it all

If you dig the work of Steven Greenstreet, be sure to check out his website, follow him on Twitter and see more of his documentaries or films on Vimeo. Also, take a peek at our previous Tumblr Tuesdays where we’ve interviewed the creators of some of our favorite Tumbrl blogs.