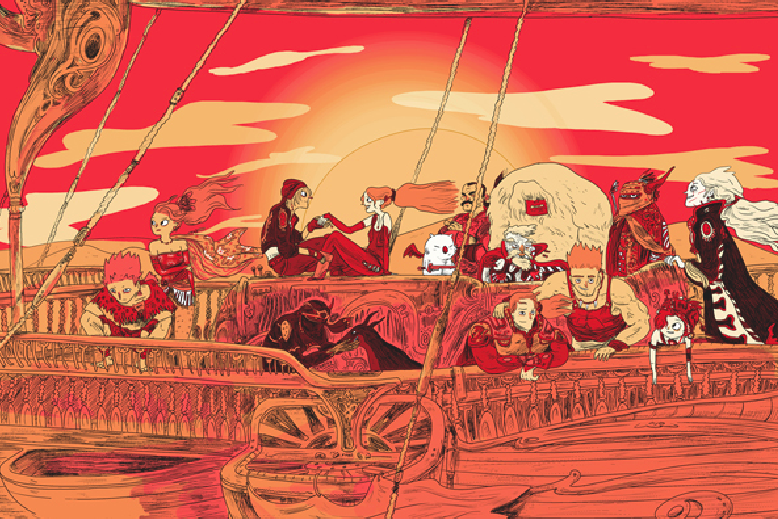 Welcome to our eleventh Tumblr Tuesday, where every Tuesday we celebrate our love of Tumblr by interviewing the mastermind behind a blog. Tumblr, a New York City based startup, is like the FFFFound for the rest of the world. It’s as shareable and fast-paced as Twitter but populated with more in-depth text and rich images.

On September 9th, 2011, we reported that at an average of 37.5 million daily posts, Tumblr reached its first mega milestone of 10 billion posts. While some on the platform might be simply reblogging photos or posts that they find interesting — I’m definitely guilty of unoriginal content — some Tumblr users have actually taken the time to create posts that are both unique and personal to them.

A 27 year old Cartoonist from Detroit, Michigan, is doing just that with his Tumblr Magical Game Time. If you have an eye for art, video games and creativity, this is one blog you won’t want to miss. In it, he creates some seriously amazing comic strips based around what he calls “a lifetime of playing video games.” Coming from a background in art and gaming myself, I am pleased to say that Gorman definitely knows his stuff. In his strips, he makes references to nostalgic moments in gaming history that only a true game connoisseur or fan could ever really be conscious of. And as these are subjects that are both near and dear to my heart, I am delighted to introduce you to the mastermind behind the strips and artwork, Zac Gorman.

Zac Gorman (ZG): I’ve been doing comics for a while now. It started back in high school when I did a strip in my school’s newspaper. That was pretty terrible. Then a couple years ago, I did this webcomic called Montgrave. It never really went anywhere, but it was absolutely how I taught myself discipline in comics. I was doing three full color strips a week for over a year before I broke. I got started in gaming on my parent’s Tandy, and the first game I can remember playing was Mixed Up Mother Goose when I was like three or four years old. I got an NES soon after that.

SM: What, if anything, inspired you to do Magical Game Time? Do you follow any other gaming comics out there, for instance?

ZG: Honestly, I drew the first Zelda motion comic as a passing thought, just a way to practice making motion comics, and it just sort of took off. I started Magical Game Time soon after I realized that people actually dig that stuff–it was just sort of a response to a positive reaction that I kept growing and expanding until it took on a life of it’s own. I read Penny Arcade back in the day, I suppose. Also, I know there have been some comparisons (and I don’t mind saying it now that we’re friends) but Maré Odomo’s Letters to an Absent Father series was pretty influential on my gaming stuff. It was the first thing I saw that sort of made me think that I could do stuff set in a pop culture universe and still make it personal. It was a huge breakthrough for me.

SM: What sets your comics apart from other comics online?

ZG: I’m not sure exactly. I suppose it’s that I don’t set out to make fanart. All my comics are very personal to me, which I think is something that’s ignored sometimes with stuff set in well-established Universes featuring familiar characters. My goal every time I sit down to draw a comic is to try to interject something essentially human into them; whether that means taking a personal relationship that I have with a particular title, or if it means taking a character who has over time become more of a symbol than a real person, and just trying to make them relatable again.

SM: When did you first realize that you really had something going?

ZG: For me, it happened the first time that I sold out a run of posters in only a few hours. Before that, I’d gotten a lot of hits and good number of followers — I’d been reblogged on a couple pretty popular sites, but that doesn’t mean nearly as much as when you see that your fans are actually willing to pay for your work. That means the world to me and I only wish that I could give them something more for their money, because without them, I couldn’t keep this up.

SM: Do you have a favorite video game? Some of your recent pieces of art include Final Fantasy references and Zelda — huge cult classics in the gaming world. But what’s your favorite game or series?

ZG: Man! Definitely the Legend of Zelda series, the Final Fantasies, the Mother series… Those are all my favorites, but I play everything! Believe it or not, I play a lot of new games too. Historically, I love anything that Ninty has ever put out, but to be honest, I also have a weird obsession with PS1 era RPGs — Suikoden, Vandal Hearts, Xenogears — those are some of my favorite games ever made.

SM: What sort of vibe do you like your comics to take? This comic in particular (http://magicalgametime.com/post/10765158450/my-friend-and-an-amazing-artist-chris-furniss) seriously gave both me and our editor Matthew goosebumps. Way nostalgic.

ZG: It’s sort of embarrassing to me how sentimental and dramatic I get at times. I really like comedy more than anything, but lately I find myself going for the dramatic more often than not. Ultimately, I just go with it though. I try not to get in the way of myself and just do what feels right at the time.

SM: Do you see yourself going anywhere with this beyond just posting to Tumblr? Have any cool opportunities popped up because of maintaining this comic blog?

ZG: I’ve got a lot of side projects going on. After doing strips for the last few years, I’d like to do a full length book. That’s sort of my big goal at the moment.

If you dig Gorman’s art just as much as I do, take a peek at his official website where he updates regularly with all of his work. You can also follow him on Twitter @zacgormania. Otherwise, check out our Tumblr Tuesday from weeks’ past: