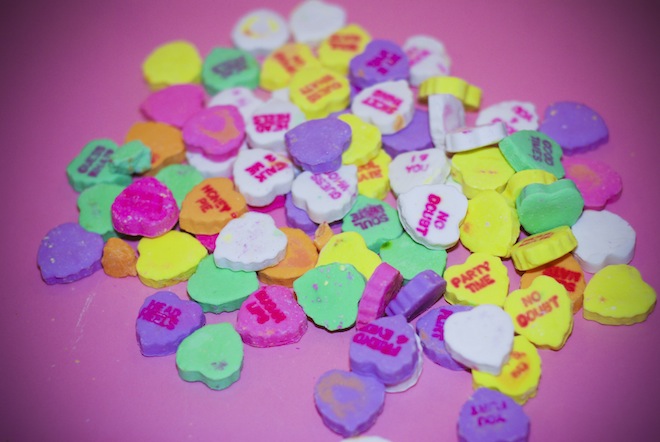 It wasn’t all that long ago that we’d have probably thought it a bit crazy to meet someone online, then have that develop into a real-world relationship. But now, with the rise of dating sites (and in some cases with those, the crazier the better), it’s not at all uncommon.

What’s interesting to me though is that so many people are meeting their significant others via more non-traditional routes on the Internet. There’s no arguing that sites such as Match.com, Plenty Of Fish and others are hugely powerful for making connections, but I knew that there had to be some great stories about people who met each other in ways that ware more “abnormal” by the standards of the Internet generation.

So I put out the tweet, asking for stories. I got quite a few, running the gamut from rather normal to completely roundabout. It’s with that in mind that I thought I’d take this weekend to share some stories with you. Maybe you’ll see these as kindred spirits, or perhaps as proof that being alone isn’t the only option. Regardless, they’re a fun read, so grab a drink and join me.

It shouldn’t really surprise me, because I actually met and dated someone via Yahoo chat rooms back in 1998, but I still do find it a bit shocking that I was far from alone. My inbox was overwhelmed with stories about people meeting via these old chat rooms, instant messaging networks such as AIM and even via BBS on dial-up modems.

Some of the high points from this era were stories like Kathleen, who met her would-be husband in 2003 via a Yahoo chat about Michigan football. They were living in neighboring towns, eventually met and have been married for 7 years. Oh, and it’s worth noting that Kathleen’s love for Michigan lives on — her email was sent to me from a University of Michigan address…

Another great one comes from Marlène, who met her suitor in 1999 on a French forum about cinema. Talking back and forth, they eventually began to send one another email, which led to chatting via ICQ and then a picture exchange before meeting in person. After all, as Marlène says, they were “in love, but not crazy”. 3 years later they were married and they now have a little girl, butMarlène tells me that a number of their friends from the same forum have gotten married as well.

But that was then. What about now? With all of the resources that we have outside of message boards,
forums and the like, how are people meeting?

Hollie says that she just added the guy randomly. While that might be an Internet etiquette faux pas, she says that they talked a few times.

“At first it was just the basics like ages, where are you from, single…”

The “single” question, apparently, was important. Hollie’s potential suitor was taken, but they kept in contact nonetheless. A few hellos and how are you’s later, Hollie found herself talking to him for over 6 hours. As she puts it, “I have no idea where the conversation had come from”.

They had been met on Facebook on January 10th, met in person on February 10th and now have been dating for 18 months, all from a random friend addition on Facebook.

Obviously, this raises the question of whether you think it’s right to go adding random people on Facebook or not. I have a pretty standing rule that I only add people that I’ve met in person, or have spoken to for long enough that they know me anyway. But what about you? What’s your rule?

Tweeting to the Future

Twitter has become the unintentional meeting spot for many, judging from the stories that I was sent. While loads of you know the story of how I met my wife via a Twitter search (I’ll save a repost and just direct you to my personal blog if you want to read the story) it seems that our tale is not all that unique.

This one, however, is.

Sleiman-Tanios was using Twitter to look for cafes in Montreal. Searching around, he found someone using the Twitter handle of @LifeInMontreal, and she was tweeting about her favorite coffee shop. Sleiman tells me that she also has a blog where she (a native of France) recounts stories of “brunch and fashion” in Montreal. It was on this blog that he saw pictures of her and knew that he wanted to meet her:

“I wanted to contact her but sending an email saying: ‘hey! I was I stalking you and I want to meet you’, was not really my style.”

So what’s a digital native to do? Create a blog, of course. “I decided to create a coffee blog and I made it cool enough that she would find it.” But how long did it take? 7 months. But now the two are living together, running an Internet marketing agency. My guess is that their love for brunch, fashion and caffeine lives on.

Oh sure, it’s a social network for professional connections, but maybe it’s the new version of the office romance as well. Jason tells me that he and his other half had met at a technology conference. As people do, they added each other on LinkedIn to stay in touch.

The two never added each other on Facebook or anything of that nature, opting instead to send messages to one another through LinkedIn. Eventually, and as the course would have it, they met up and have now been together for 2 years.

I will say one thing – This is the only story that I got about a LinkedIn connection. Perhaps the penchant of people to use Glamor Shots and boring professional photos for their profile images acts as a potential relationship blocker. Let’s face it, nobody looks good on an industrial blue background. The story of Carlos and Tara is pretty unique. Actually, you might know Tara. She’s better-known online as Miss Rogue, the CEO of Buyosphere on top of being an author and a speaker. A couple of years ago, Tara starting showing up all over the Internet and this caught Carlos’ attention.

“I would say that about 8-9 months ago I started to notice her more online, mostly because I started using Twitter regularly and I was following a lot of news about social media. I decided to add her on Facebook not really expecting her to accept but she did because she was trying to make local friends & connections… Foursquare and Gowalla soon followed.”

Carlos says that he and Tara didn’t really talk much, other than a Facebook Like or a tweet back and forth. But a couple of days prior to Valentine’s day, his Facebook account was hijacked by his co-workers. It apparently caught quite a bit of attention, Tara’s included. She invited him to an even that she was organizing on Valentine’s day.

Carlos was a bit starstruck, by his own admission, and didn’t end up approaching Tara at the gathering. Fortunately an invitation to a neighborhood food #dishcrawl was accepted. Though Carlos wasn’t expecting much, apparently Tara was open to yet another date, which Carlos has recounted here, in a blog post.

In short, he spent some time walking around town, planting notes to Tara with Gowalla’s message service. The idea was to take Tara on a walking date and to have her find the notes as they went along. It seems to have worked well.

“The resulting date lasted just over 4 hours because, my date was so impressed by all the work I did she wanted to check into as many places as possible. More importantly, the date went so well that it resulted in several follow-up dates and an amazing relationship.”

The two have stayed together ever since, presently celebrating 6 months of a relationship together.

So there you have it. A few stories of flirting, looking and finding love online, but not necessarily in the ways that you would expect. Fear not, lonely-hearted. There is hope for all of us. Sometimes you just have to take to social media.

Read next: Kevin Systrom on Instagram's meteoric rise...and when IS it coming to Android? [Interview]