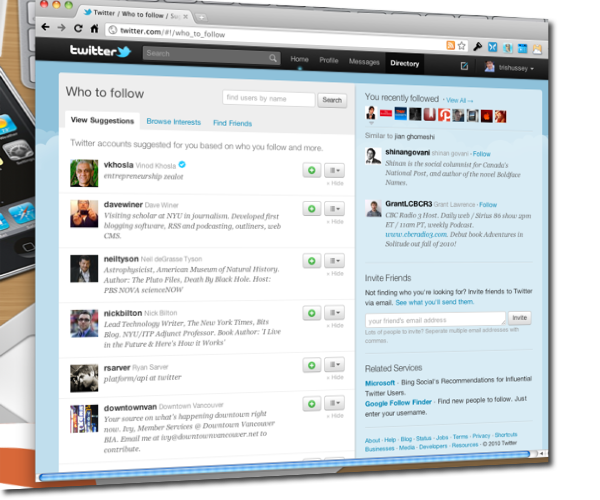 Word is filtering around Twitter tonight that Twitter has added a new tab. Some people see “directory”, some people see “people” but what everyone sees in the end is a new way to get suggestions of who you might like to follow on Twitter. To the best of our knowledge, this is a brand new thing and it appeared so suddenly I was even asking myself, “wait wasn’t this always here?”. No, it hasn’t and this is what it looks like (for me):

In the end, what this really is Twitter giving us a whole new way to find people to follow. This is taking the “similar to” or the suggestions you see on the sidebar to a new level.

We’ve reached out to Twitter for comment, but in the meantime, go to Twitter and see if you have “Directory” or “People” next to “Messages”. If you do, give it a try and let us know what you think.  Contrary to some reports, it appears that everyone has access to this feature now, so let’s see how good the suggestions are over all for folks.