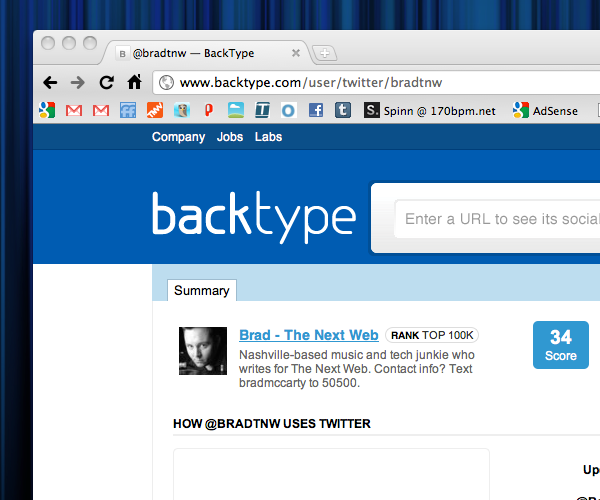 In a time where everyone seems to be all about influence, it’s not terribly surprising to see BackType take on this route. The site, which typically has been used to measure the “social impact” of various websites, has now started putting its influence algorithm to work on Twitter usernames.

According to the BackType blog:

Identifying influencers is an increasingly important part of social media marketing for companies of all sizes. These profiles include a score from 1-100 using a proprietary algorithm similar to Google’sPageRank to indicate how influential a user is. More specifically, the score is based on an examination of a user’s interactions and reach.

So how well does it work? I suppose that depends on how you see yourself. As Twitter continues to grow, people have to realize that influence reaches far beyond whatever specific sector in which they place themselves. For instance, have a look at my BackType results:

While I might consider my influence to be somewhat higher than the 34 score that I was given, I have to bear in mind that only people who follow geeky tech stuff really care what I have to say. In a Twitter universe that is made up of far more than geeky tech people now, that influence takes on a completely different measurement when it comes to marketing to or from me.

It doesn’t have quite the depth to the results as sites such as Klout have managed. However, for a good overview of your “score”, it’s still worth a look. The question ultimately comes down to the idea of influence in general, though. Is BackType looking forward or is it another site that misses the mark?