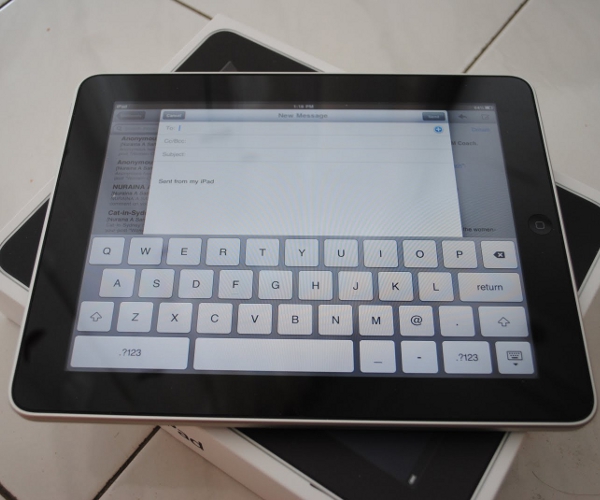 So I used to have an iPod Touch, then I ditched it for the iPad in April. I don’t have an iPhone (never have). When I switched to the iPad, I brought many of my old iPod Touch-sized apps over to the iPad, many of which are apps that I was using everyday. At first, I didn’t mind that they looked bad and only took up about a fourth of my iPad display. However, as more iPad apps started surfacing, I found myself using those not so great looking smaller apps less and less over the last six months.

However, there are ten apps that I just can’t take off of my iPad still, even though these companies haven’t yet rolled out iPad apps. That said, other than Skype, which I sometimes use on my iPad to do a quick message or call, I’m basically not using any of the ten apps below anymore – I keep them on my iPad in the hope that one day soon I’ll get an update telling me that these companies have finally gotten around to getting an iPad app out (for some of these apps we wonder if they’re waiting for a iOS 4.2 and/or a camera…) So here they are in no particular order:

Foursquare is a service I use everyday on my Android phone, but as I’ve written before, I would really like a Foursquare iPad app. Of course, the focus shouldn’t be on checking in (though I would certainly do so once in a while), it should be on providing a dashboard type of view of my and my friends’ activity, as well as enhanced venue pages and mapping.

What are they waiting for? Most likely, this is in the plan, but the rapidly growing service (that’s had growing pains lately) just hasn’t had the time yet to build it.

A Yelp iPad app would most likely function as an optimized version of the Yelp website, and that would be just fine with me. Again, enhanced mapping features and venue pages, as well as a cool way to visualize reviews would be much appreciated.

What are they waiting for? Most likely a camera.

As I said above, this is the app that I use the most frequently on the iPad even though there is no iPad version. Again, some kind of version of the Skype desktop client optimized for the iPad would be ideal here, as would Facebook Connect integration.

What are they waiting for: Definately for iOS 4.2 so Skype can run in the background, and even perhaps for a front-facing camera for video calls, which would be awesome on the iPad

Yes, there is Friendly for $0.99. Yes, there is also touch.facebook.com and yes, Facebook.com itself looks perfectly fine on the iPad in Safari. Nonetheless, and as the Facebook iPhone app has shown, a customized interface for Facebook can certainly bring in the users.

What are they waiting for? Almost certainly, Facebook is waiting for a camera, as photos are just too important to its service to waste time building an app for a device that doesn’t have a camera.

We’ve said it before here at The Next Web, and I’ll say it again, we use Hootsuite everyday. That said, a full featured Hootsuite iPad app would probably be one of the top five or so apps I would use everyday, so please Hootsuite, please give this to us soon!

What are they waiting for? Most likely, this is a time and resources issue for Hootsuite

The more the iPad gets used more in the business world, the more glaring a need for a LinkedIn iPad app. Having worked in companies where LinkedIn is a central part of the everyday marketing environment, I know how frustrated I would be at this point if I had to used LinkedIn everyday and I didn’t have an iPad app.

What are they waiting for? No idea.

Plancast is a great way to organize and share events, as well as to see what is coming up and who is going. A strong iPad app with integration into other services would certainly up my usage of the service a great deal, and I suspect it would for others as well.

What are they waiting for? As with Hootsuite, time and resources.

PayPal has really been rapidly innovating with its iPhone and Android apps lately, and I’d really like to see what the widely used service could do with an iPad app. Also, popular finance app Mint, and banks, such as Bank of America and Wells Fargo, which already have iPhone apps, should really roll out iPad versions as well.

What are they waiting for? Well, it certainly isn’t money or resources – my guess is that all three have iPad apps in the works.

iPad addict alternative: Many, though if you’re a Chase customer, you’re in luck, as Chase has a nice app.

Of all of the apps that I would like to see ported to the iPad, this is probably #1 on my list, not for utility of course, but just for the experience, especially with video playback. Here’s hoping it comes to us soon.

What are they waiting for? Probably already in development (or perhaps the economy to pick up?)

Again, this is an app on the iPod Touch that I used daily, but since moving to the iPad, I’ve barely touched it, instead getting my news from the BBC and Reuters iPad apps. CNN really did do a great job on its iPhone app, so I’m expecting to be blown away when the iPad version comes out, otherwise, it would be a major disappointment.

What are they waiting for? Perhaps a camera, as the iReport function kind of needs it.

Ok, so those are my ten (well, 13 if you count the extra finance apps) services that I would love to have on my iPad. What are some of the others that you would like to see?

Read next: What is the Future of Web Apps? [Video]