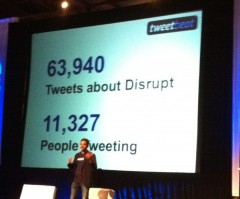 Tweetbeat hopes to sort the wheat from the chaff on Twitter.

The product by Kosmix, announced at today’s TechCrunch Disrupt conference, hopes to deliver the best tweets on any topic to its users. The example the company used was sorting spam out of the #tcdisrupt hashtag. The company also claims that its semantic search technology can spell the end of the hashtag.

Interestingly, the service also aggregates “influencers” for certain topics. For example, when the Oakland Raiders played the Arizona Cardinals this weekend, the site provided links to the best Raiders and Cardinals bloggers’ twitter accounts and links to players’ twitters, too.

This new method of taming the Twitter Firehose has potential.

With more and more users switching to live-stream modes in their Twitter clients, it’s become more and more difficult to sort the noise out of twitter streams. Indeed, the #tcdisrupt hashtag stream was largely hijacked by spammers yesterday afternoon.

Tweetbeat hopes to fix this problem. By weeding out these bad tweets and promoting tweets by trusted sources, the company hopes to fix the pervasive problem of too much Twitter noise. If the model works, it could become very popular very fast.