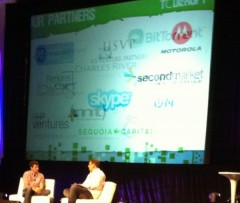 Kevin Rose took the stage at TechCrunch Disrupt today and announced that he’d never really wanted to be Digg’s CEO.

As a CEO, he said, “Sitting on new features and having to sit on your hands was incredibly frustrating. It felt like ‘Why aren’t we releasing these new features…’ I would have rather hired more engineers than focused on revenue if I could do it again.”

Rose also offered some insight into why Digg v4.0 had to arrive. “We saw a drop in traffic at the beginning of the year. As users get bored and antsy, they start going elsewhere. As a result, we had to do something big, something bold. That’s where v4.0 came from…It’s a lot of stuff we should have done a long time ago, but there are definitely some big mistakes we made.”

Rose sees a major concern with Twitter and Facebook, as he says that those sites are taking a large slice of the traffic that Digg once had. As a result, the site introduced a twitter-like feed of stories straight to users inboxes. However, the new Digg caused what essentially amounted to a mass walkout.

“The mistake that I made was that we had this big community who saw these new features as our company taking their Digg away. As a result we had a glut of stories on the front page like ‘I hate Digg’ or ‘New Digg Sucks.'”

Rose is still quite intent on keeping the site going, though. Rose revealed that the largest acquisition offer he’d ever received for the site was in excess of $80 million. While he said that it was very tempting, and in retrospect that it may have been a good idea, it was tough to want to cash out when Digg was breaking traffic records every month. Even now, he says that it’s tough to want to be out of Digg when there are still opportunities for growth.

However, getting to cash out a little bit was a huge boon for Rose. Since he cashed out part of his ownership stake in Digg, he has started angel investing, with profitable investments in Foursquare, Gowalla, ngmoco, Zynga and Formspring.

Read next: Video: Shwowp wants to give you control of your shopping data