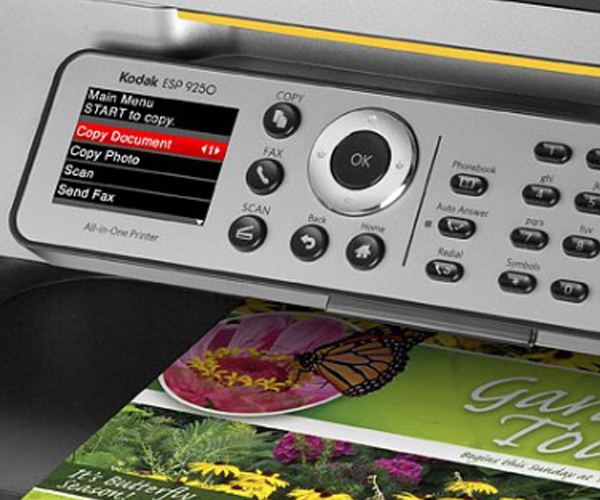 First thing’s first – the Kodak ESP9250 is a great printer. I’ve been playing with it for the better part of four days now and I’ve really had no complaints.

Print quality is superb, both on standard and photo paper, colors are rich, printing is fast and it easily hooks up over WiFi. As far as the printer is concerned, it would be a winner even by itself.

But what really sets the 9250 apart is its software bundle. Yes, I’m serious.

While I’m not generally a fan of loading an entire suite of software for a peripheral device (I’ll let Windows 7 load only what’s necessary to make it work), the Kodak AiO Home Center is worth its weight in install space.

But let’s backtrack, just a bit. We’ll get to the social media features in a moment.

The 9250 is an all-in-one print/copy/fax/scan machine. After taking it out of the box, it requires about five minutes to set up and connect to your wireless network. Of course, you can also choose to connect it via USB or Ethernet, but who can be bothered by cables?

As you’re setting it up, you’ll likely notice that the 9250 comes with a full-capacity color as well as a black ink cartridge. Note that I said full-capacity. No “starter” cartridges on this one. This is one area where Kodak is stressing its price to value ratio. The refill cartridges, for color, should only run you around $17 and the black cartridge will be a bit less at around $10. Quite a bargain in today’s inkjet market, where it’s sometimes easier to just throw away your printer and buy a new one.

It does, of course, have a full-color 2.4″ display on the front of the machine, where you can print photos directly from SD, MS, Duo or a CF card. It can also read directly from a USB drive plugged into the front. Kodak also has a pretty cool application for your iPhone or iPod Touch that will allow you to print directly from your device, or send to your Pulse digital photo frame.

Overall, build quality on the 9250 seems spot on. It’s solid, if a bit heavy, and all functions are intuitive. The only issue that I had with it was setting up my wireless password, which would have been easier had I paid attention to doing it on the color screen rather than using the telephone keypad. Oops!

The AiO Home Center is the brain of the 9250. While there are a number of functions that you can do directly from the device itself, the Home Center opens up a wealth of other abilities. As you might expect, you can select photos from your computer, retouch them and even crop them in the software. What you might not expect, however, is where else you can print from.

As you’ll notice, in the red box, you have a variety of social media sources where you can log in and pull your images directly into the Home Center. What’s great about this is that you still have all of the same editing and cropping abilities with these images as you do with your native ones. It really is a seamless transition between the two.

I logged in with my Flickr credentials and pulled off a few photographs that I’ve taken over the years. There were some that I had always wished that I had physical copies of, but never took the time to download or order them. The 9250 (well, OK, so I had to play with it to tell you about it) made it really easy to access those images and get great prints from them.

The rest of the Home Center software is pretty much as you would expect. There are options for printing, scanning, some tips and a project center and you have a phone book/contacts screen for the fax function of the device.

Print quality on the 9250 is exemplary. I printed a variety of projects, including color and black and white, across both regular and photo paper. I was actually pleasantly surprised at how sharp and clear the black text was printed on regular paper. My experience, in the past, has been that inkjet printers do a mediocre job with text, at best. The 9250 was not only surprisingly good, it set a new standard for what I’ve seen as far as clean, clear text from an inkjet.

Using the included photo paper, black and white prints tended to be a bit toward the green side right after printing. However, given around 30 minutes to rest, these too cleaned out nicely and produced really exemplary results.

Scanning with the 9250 was equally as impressive, and duplex scanning or printing were both very easy with a built-in duplexing capability.

On my desk, I have a Canon printer that I paid about $50 for at a big-box store. For my everyday needs, it does a passable job. However, cartridges don’t last long and run about $30 to replace for color, and another $20 for black. Suffice it to say, it won’t take long to equal the $199 price of the 9250. Photo quality on my Canon is passable, at best, but nowhere near what I’d call “good”.

If you’re in the market for a quality printer for your home office or even your dorm, the Kodak ESP9250 is a great deal. MSRP for the device sits at $249, but you can find them online through major retailers for $199.

Again, as we talked about the the review for the Pulse photo frame, Kodak really seems to understand that it takes something extra to catch the attention of our generation. The 9250’s ability to print directly from social media sources is that something extra, and this printer will never ask you to find its cow.