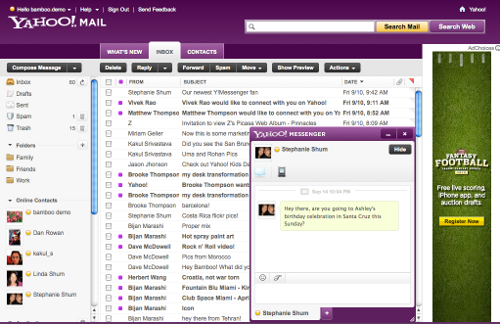 Yahoo! has announced that it will be rolling out a new Yahoo! Mail Beta to its 281 million users worldwide over the next few weeks. On the Yahoo! Mail blog, the company promises a “faster, cleaner, and safer” experience.

As our Alex said earlier today, Yahoo! today held its Project Runway event and this is part of the announcements (obviously, Alex doesn’t think too highly of the company’s direction). Also, this update follows the already rolled out iPad interface of Yahoo! Mail – though we’re not sure if that will be the same “tablet” interface that today’s post mentioned.

The big question of course is: will this be too little too late for Yahoo! Mail? Right now, Gmail is almost unquestionably the best web-based email service, and just last week, Google announced that it now supports OpenID integration with Yahoo!, in a clear message to users that it is now easier than ever to make the switch to Gmail. That said, Yahoo! Mail has been a pretty strong fixture not just for Yahoo! but for the Internet as a whole for a long time, and if Yahoo! can make its mail service into a more modern version, we suspect that many mainstream users that haven’t already jumped ship, won’t in the near future.

Of course, Gmail continues to rapidly improve, and if Google’s social “layers” plan (not to mention Google Voice integration) takes off, Gmail will be that more attractive to “the mainstream”.

We’ll keep an eye out for the new Yahoo! Mail and give our thoughts after a test drive.