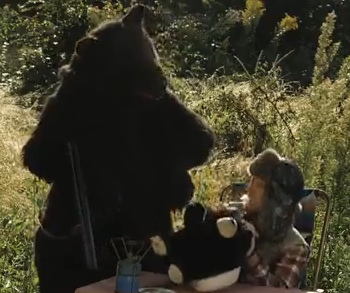 When Old Spice scored a major hit with its interactive YouTube ad campaign recently, many wondered where the next big interactive video hit would come from. Turns out, it’s stationery brand Tippex.

The company is promoting its ‘Pocket Mouse’ product with a brilliant campaign that lets you decide exactly what an on-screen hunter does to a bear via specially shot videos. It’s not multiple choice, you’re allowed to type in any verb. Type in “eats” and you get a video of the hunter eating a bear, type in ‘hugs’ and the bear and hunter share an embrace, You can even get a (censored) explicit scene if you know what to try.

Not every verb is covered – sometimes you’ll get a video of the bear and hunter holding an ‘Error 404’ sign, but working out which videos the producers have shot is where the fun lies.

Although the campaign appears to have been online since mid-August, it only seems to be gaining viral traction today. It’s not quite as remarkable as the Old Spice campaign, which saw personalised videos produced for individual viewers, but it’s imaginative, original and well worth five minutes of your time. Try it now.