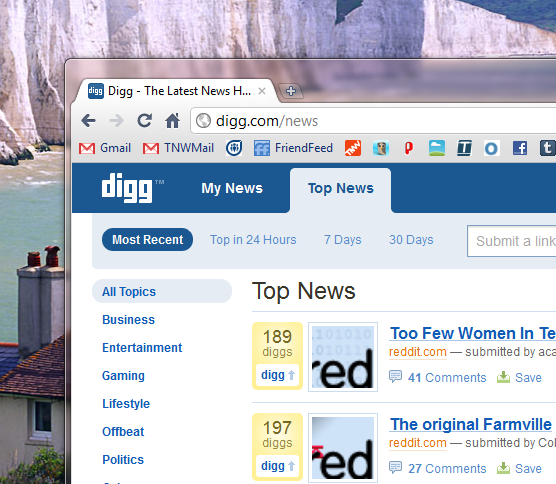 Ever since the launch of Version 4 of Digg, people have been up in arms about how the site has essentially turned into nothing more than a glorified RSS dump for sites. In case you’ve missed the news, the biggest problem behind the new version is that it allows sites to push their RSS feeds directly into their timeline, which can cause the overall quality of front-page posts to diminish.

Much has been written about the things that need to happen in order for Digg to keep its users happy, but it seems that some people are taking the matter into their own hands.

A site that is similar in function (though don’t tell its users we said that), Reddit, has decided to show first hand what can happen because of how the new site is designed:

Yes, those are indeed 7 headlines on the front page of Digg, all submitted by the Reddit RSS users, as noted in the comments of our post.

Previously, it was harder to game Digg because a user would have to submit a link and then the link would have to be up voted by the population. However, due to the random nature of Reddit’s readership, it’s now quite easy to sway the entire front page as all articles are submitted regardless of how good, bad or indifferent.

While in the past Digg users might have responded in kind by overtaking Reddit, the backlash against Digg is more apparent than ever given the comments to to the Reddit articles:

So what is Kevin Rose’s next step? The first wave of changes almost certainly seem to have not been enough.

Read next: TwitJump springs forth as one of the top Twitter iPhone apps.