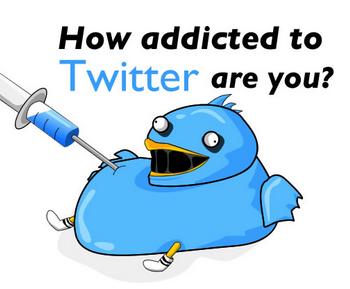 I wrote a post a few days back covering a few reasons why Twitter can be a rather annoying, time consuming tool. To my surprise, it has been something of a hit. We bloggers have a bad habit of sometimes taking an idea that is playing in our heads and turning it into a blog post. Sometimes people love it, other times you could call it a miss.

My mind was stuck on the question: what would happen to me if tomorrow Twitter turned off forever? The answer was brutal, so I wrote a post to calm myself and the other people around the world like me who have an addiction. No, it’s not drugs, it’s Twitter.

Many of us in the tech world have a general genetic weakness for communication and ego stimulation. Email is a mix of the two, but not nearly as bad as our 140 character friend; if email is cocaine, Twitter is crack. The only problem is that Twitter is free, and legal. You can’t kick a habit that is so wholesome, right?

Marshall Kirkpatrick, who I know just well enough to call a friend, has written a wonderful post called “Twitter Is Paying My Rent,” which used to be true. Now Kirkpatrick has updated the post to point out that he has purchased a house, and that Twitter is a big contributor to its payments. What, you may ask, how the heck does he do that? Twitter is the world’s best source of fast information, and that is the juice that blogging sips. So Twitter helps Marshall be a better blogger, and thus make more money, and so forth.

It’s true, Twitter is such an amazing application that it is almost impossible to ever leave behind.

Are you addicted to Twitter? You might be. If you exhibit these tell-tale signs you are probably in throes of sweet, sweet dependence:

Do any of those sound like you? If so, we suffer from the same painful problem. Is there any hope for us? During long personal struggle, and by that I mean my girlfriend hiding my iPhone sometimes to keep me from using Tweetie (bite me, Twitter for iPhone), I have learned that it is possible to disconnect. Just don’t do it when you want to work.

The problem is that Twitter is so good, so useful, and so accessible, that to not use it seems to be a waste. Balance, my fellow Twitter addicts, we need more of it. What do you do to keep your addiction in check?