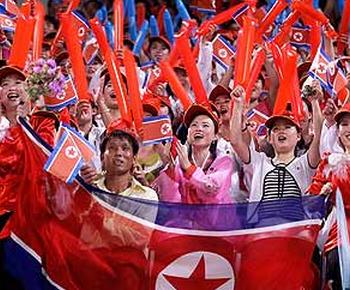 This should end the discussion of Twitter being mainstream or not: North Korea has a Twitter account. In an exercise of odd futility, sad content, and a  blanket of depressing comedy, you can now follow party-line propganda straight from the DPRK in bite sized format!

Their Twitter account is called @uriminzok, which should translate into “our people” in Korean, and is just about as bad a Twitter account as you can find. Sure, the ruling party of North Korea is late to the Twitter game, but their content is a little weak. So far, every tweet except one is a blurb and a link to a page filled with odd commentary on the past victories of North Korea, take a look:

If you are running Chrome, it should automatically translate the linked pages into your preferred language for reading. You won’t get far, prose that poor is deadly past three paragraphs.

Is there anything that we can find here that is not a bit sad? As it turns out there is, take a look at this tweet:

Guess what that means? According to Google Translate it works out to: “Website, “our nation itself” is a twitter account.” There you go, news and a laugh, the TNW way.