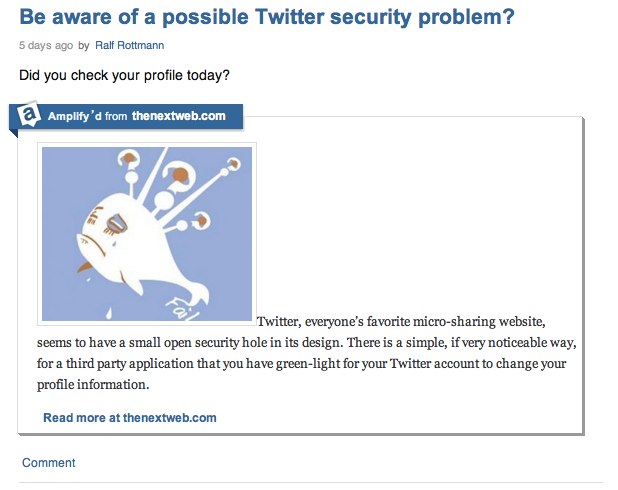 Amplify might very well become my new number one service for driving conversations.

Back in August 2009, when Facebook acquired FriendFeed, the blogosphere was abuzz. Many technology geeks had been using FriendFeed as a tool to aggregate their social media sources and share with their entourage.

As far as we know, Amplify has not been covered elsewhere, yet.

The primary reason for this: The great team grouped around Amplify’s CEO Eric Goldstein has deliberately chosen to stay beyond the radar for a while and solely focus on product quality. No start-up rallies, no coolest-geek-in-silicon-valley shows.

We think the New York guys made the right decision. Here we are, roughly a year after they started working on the service and what we’ve got is pretty intriguing:

In short, Amplify let’s you clip content from anywhere on the web and start a conversation with a community interested in the topic. While many services already exist, that aggregate whatever you shared elsewhere, Amplify is not an aggregator. In fact it’s the other way around: You start a conversation on Amplify.

And the conversation is really what’s at the heart of the service.

Starting an Amp is a straight-forward experience: Ready-made bookmarklets for Firefox, Chrome, Safari, Opera, Internet Explorer, Android Smartphones, iPhone and the iPad let you clip, share and add your take on specific parts of articles and blogs you read – as opposed to just creating non-speaking short URLs.

The service doesn’t mix in photo albums or social gaming, just because it’s currently en vogue to do so. It doesn’t limit its users to 140 characters, because an engaging dialog might require more than a few words.

I particularly like, that it doesn’t blindly grab everything I post from my Twitter or Facebook account because frankly, the majority of my tweets were never meant to spark a dialog (that’s maybe, why they’ve once been called status updates). Amplify literally puts me back into control.

Once you’ve created content inside Amplify, the service does a perfect job of distributing it out into many services, should you so wish. Amplify currently integrates with Twitter, Facebook, Google Buzz, Ping.fm, Tumblr, Posterous, Plurk, Diigo, Friendfeed, Delicious, Clipmarks.com and just today announced additional support for WordPress and Blogger.

Your personal Newsfeed consolidates all conversations going on within your community. And yes, Amplify supports public and private groups, too. A feature, which makes it a perfect tool for collaborating with your team mates or business peers.

If you really haven’t heard about Amplify before, go check it out now! You needn’t go through complex signup, simply use your existing Twitter or Facebook account to start amplifying your ideas.

Read next: iSuppli: Four Out Of Five Handsets Will Include GPS By End Of 2011